Change the European Chessboard on Russia 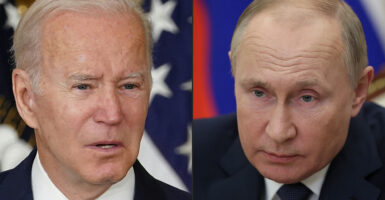 In 1977, Jimmy Carter went to the University of Notre Dame and told America that we were beset by “an inordinate fear of communism.” By the end of his presidency, as Soviet tanks rolled through Afghanistan and Cuban proxies ravaged Africa, Carter said he was wrong and immediately put into production the B-1 bomber, the Abrams tank, and the Minuteman 3—weapons systems Ronald Reagan would build upon to confront the Kremlin and bring about the end of the Cold War.

Today, we are at a similar crossroads in Europe with a president who has been outmaneuvered since Day One by the former KGB lieutenant colonel who serves as Russia’s president. Starting with the disaster in Afghanistan, the faculty lounge fecklessness of the Biden administration has given the green light to the Russian dictator.

Yet, there is still time for even this president to change the calculus on the European chessboard.

Let us start with the proposition that an ideologically blinkered Biden administration will not reassert American energy independence that would free America from foreign dependency, liberate Europe from Vladimir Putin’s stranglehold, and, yes, cut inflation.

We should also accept that Putin does not care about the economic sanctions Washington has preferred, since he now has a financial backstop in Beijing willing to prevent an economic collapse in Moscow.

We need to alter the calculus in Putin’s mind. Make NATO militarily relevant again. Encourage Finland and Sweden to join NATO. They are countries with long experiences of Russian aggression, and each has modern, capable militaries. The fall of Ukraine threatens them because the Kremlin will next look to intimidate the Baltics on the Nordic doorstep.

Even though Finnish and Swedish public opinion generally oppose NATO membership, Hudson Institute senior fellow Arthur Herman has succinctly argued that both nations have attitudes toward Moscow that run against the stereotypical social welfare type. According to Herman, a poll said that 74% of Finns are prepared to fight should the Russians invade (which they did twice in the last century), compared to 18% for Germans.

Sweden is already posturing its naval and air forces to cordon the growing Russian military base in Kaliningrad. Bringing them into the fold threatens Putin’s northern flank and checks his play in the Arctic. It could reverse the course of history and create a Swedish threat to Russia in the Baltics for the first time since the reign of Gustavus Adolphus.

We must also hold our nose and admit that we have ignored Turkey’s traditional role as a counterbalance to Russia. Yes, Erdogan is Erdogan, but he sits atop a massive army and air force and a culture that has spent centuries fighting czars and Kremlin commissars.

This is the time to throw away performative diplomacy and reintroduce Nixon/Kissinger real politic into the equation. If Finland, Sweden, and Turkey enter the mix, Putin faces a military combination across his entire front that his limited resources cannot handle—in other words, the flankers can be outflanked.

Carter was faced with global threats that he at first did not understand. At least the man from Plains was honest enough to reverse course when he realized he was wrong. Sadly, we can’t count on a similar epiphany from the current occupant of the White House. He continues to play checkers while Putin is playing three-dimensional chess.