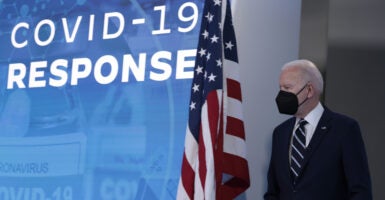 The Pension Benefit Guaranty Corp. placed a proposed rule on the Federal Register about keeping records of staff who request medical exemptions to the vaccine mandate for federal workers. Pictured: President Joe Biden arrives Jan. 13 at an Executive Office Building auditorium to speak about his response to a surge in COVID-19 cases. (Photo: Anna Moneymaker/Getty Images)

The federal agency overseeing government pensions on Friday became the latest agency to create a rule for keeping records on employees who seek medical exemptions from the Biden administration’s COVID-19 vaccine requirement.

The Pension Benefit Guaranty Corp. placed a proposed rule on the Federal Register about keeping records of staff who request medical exemptions to the vaccine mandate for federal workers. A public comment period will end March 29.

The agency has more than 1,000 employees. The submitted regulation says: “PBGC estimates that an average of two employees each year will submit Request for Exemption to COVID-19 Vaccination Requirement Forms.”

Earlier this week, the Commerce Department submitted a similar rule to the Office of Management and Budget for public comment. That Cabinet-level department has about 47,000 employees.

The Pension Benefit Guaranty Corp.’s notice on the Federal Register was placed by Hilary Duke, the agency’s assistant general counsel for regulatory affairs.

Several Republican lawmakers already have criticized the Biden administration for what they characterized as its “tracking” of federal employees who seek religious or medical exemptions from getting one of the COVID-19 vaccines.

The notice for the latest rule says:

PBGC allows an exception from the vaccination requirement for employees who demonstrate medical reasons or disabilities that would make the COVID-19 vaccine unsafe for them. …

[E]mployees must complete the Request for Medical Exception to COVID-19 Vaccination Requirement form. The PBGC uses the information on this form to verify employees’ assertions that they are entitled to an exception to the COVID-19 vaccination requirement because of their medical or disability statuses.

A spokesman for the pension agency told The Daily Signal early Friday that it would attempt to comment by 4 p.m., but the agency had not responded as of publication time.

For the time being, the proposed rule would not be enforceable because a federal judge last week blocked the Biden administration from enforcing the president’s executive order that every federal worker must be vaccinated.

The matter hasn’t been fully adjudicated, however.

The Supreme Court struck down a separate Biden administration mandate that would have applied to private employers with 100 or more employees.

The pension agency’s proposal comes as the Biden administration considers keeping a list of those who apply for religious exemptions to the president’s vaccine mandate for federal employees.

The rule this week from the Commerce Department said the department would use the medical exemption request form “to make a recommendation to the supervisor based on the medical information provided in the form.”

The Office of Management and Budget oversees all federal regulations.

“To process an employee’s medical exception, agencies need to collect certain information, including, for example, the employee’s name, the request for an exception and, if they are provided one, that they have been granted an exception,” an OMB spokesperson told The Daily Signal when asked for comment earlier this week on the Commerce Department proposal.

The Daily Signal first reported Jan. 11 that the Biden administration was testing a policy at a small federal agency, the Pretrial Services Agency for the District of Columbia, that likely would serve as a model for government-assembled lists of Americans who object to taking the COVID-19 vaccines on religious grounds. Four days later, The Daily Signal reported that 18 other federal agencies are considering doing so.