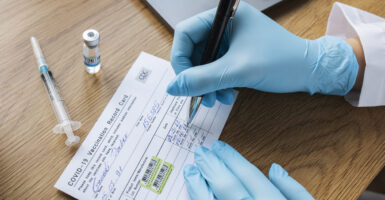 This week, we revealed that an obscure federal agency plans to keep lists of the “personal religious information” employees who had religious objections to the federal employee vaccine mandate.

As it turns out, the little-known Pretrial Services Agency for the District of Columbia isn’t the only federal agency involved. As we feared, a whole-of-government effort looks to be underway.

A little digging at the Federal Register revealed that there are at least 19 total federal agencies—including five cabinet level agencies—that have created or proposed to create these tracking lists for religious-exemption requests from their employees.

As the nation’s largest employer, with over four million civilian and military employees, the federal government has received tens of thousands of religious exemption requests. It now appears that an increasing number of federal agencies are keeping and preserving those individuals’ names, religious information, personally identifying information, and other data stored in lists across multiple government agencies.

The earliest set of proposals appears to have been rolled out in October of last year, during the start of the holiday season in a possible effort to ensure very little attention was paid to a coordinated data collection move. Many of the announcements have clocked only a few page views. Almost none attracted any public comments. Most permitted only a 30-day window for submitting objections. All announcements were issued within a few weeks of one another.

The Pretrial Services Agency in D.C. was only the most recent iteration of a disturbing trend—the Biden administration is creating lists that can all communicate with one another on which individuals have sought religious exemptions from the federal employee vaccine mandate or other religious accommodations within the scope of their employment by the government.

Several of the notices, but not all, indicate that they are being issued to implement Biden’s COVID-19 executive order on federal government employees. The rest have proffered the Privacy Act of 1974—which establishes a code of information practices that governs the collection, maintenance, use, and dissemination of information about individuals stored by federal agencies—as their justification for the creation of a new list.

The notices do not explain how long they plan on storing this data, why they need to share it between agencies, or why they need to keep it beyond the decision to grant or deny an employee’s religious accommodation request.

The Federal Register announcements raised eyebrows for Missouri Attorney General Eric Schmitt. In his public comment to the Secretary of Transportation Pete Buttigieg stating strenuous opposition to the list creation, he noted:

On November 18, at the direction of the Biden administration, four federal agencies simultaneously announced that those who exercise their legal right to seek a health or religious waiver from a vaccine mandate would be tracked in federal databases. Rather than give the public ample time to weigh in on the advisability or legality of collecting such personal information, the Department of Transportation’s database in particular became effective on the day it was published…

The chilling effect on a citizens’ exercise of religion due to the creation of this Database is alarming… the federal government decrees that a citizen who seeks a medical exemption or a waiver based on a sincerely held religious belief has automatically consented to being entered in the Database. To put it plainly, invoking the legal right to exercise one’s religious faith risks simultaneously waiving that legal right.

The day we broke the story on the Pretrial Services Agency announcement in the Federal Register, the notice had 16 views. As of the publication of this story, it now has more than 13,000.

Schmitt is demanding answers from the Biden administration. We’re hoping more people do, too.