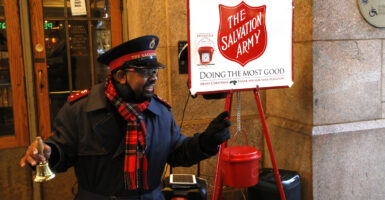 Salvation Army chapters across the country saw a significant drop in donations in the weeks before Christmas because of fallout over a racially charged training curriculum, according to a nonprofit group that advocates “colorblind” policies.

Chapters in California, Massachusetts, and Michigan are among Salvation Army locations cited by Color Us United as affected by its campaign against training materials, called “Let’s Talk About Racism,” that include tenets of critical race theory and anti-racism teachings.

The church’s national headquarters has yet to announce fundraising figures for 2021, but it is evident that financial contributions to The Salvation Army have been “tanking,” Color Us United spokesman Christian Watson told reporters.

“It’s very clear their numbers have been hit hard,” Watson said of The Salvation Army during a virtual press conference Jan. 19. “You can either chalk it up to COVID or economic turmoil, or you can do what we claim is the probable cause—and that is Color Us United’s particular efforts against The Salvation Army’s woke curriculum.”

As previously reported by The Daily Signal, one session includes definitions of individual, structural, and institutional racism that claim whites are the beneficiaries of discriminatory policies. Another session makes the case that the larger Christian church, as well as The Salvation Army itself, has been infected with racism.

“What has not changed is that racial groups are placed into a hierarchy, with White or lighter skinned people at the top,” a sentence on Page 2 says.

Watson cited news reports that point to a steep decline for The Salvation Army’s annual fundraising drive, called the Red Kettle Campaign. Boston.com, for example, found that donations to the Massachusetts division were down 20% from 2020.

Kenny Xu, president of Color Us United, read to reporters a text that he said he received Dec. 21 from a Salvation Army officer in central Michigan who refers to an infusion of sarcastic “apologies” from white residents for being white:

Locally we are down in our fundraising by about $100,000 to date. My kettles get flooded by these white apology papers daily. I will need to face the budget realities of all this come January. But I don’t blame you guys. The army put itself in this situation regardless of where the push came from to correct it.

Jolley did not respond until late Thursday afternoon, when he emailed to say that “because of reporting timelines around the country, we won’t have overall fundraising totals until mid- to late-February.”

“We’re happy to share those totals once [they are] finalized in a few weeks,” he added, and said that Salvation Army officials had not responded earlier because they “were at our National Advisory Board meeting last week.”

The fundraising figures could become available when The Salvation Army releases its next annual report in March. The charity raised $2.3 million in 2020, up from $1.9 million in 2019.

Founded in London in 1865 as a Christian church, The Salvation Army is widely known for its charitable work for the poor. The church is organized in a military-style structure that includes officers, soldiers, and other volunteers. Collectively, church members are known as Salvationists.

Gen. Brian Peddle, a Canadian who is CEO and international leader of The Salvation Army, first announced the church’s “Let’s Talk About Racism” curriculum for members in a May 2021 Facebook message.

In November, weeks after Xu and Color Us United began to publicly condemn the material, the church said that its New York-based International Social Justice Commission had withdrawn the documents for “appropriate review.” They are not currently available online.

In a separate interview, Xu told The Daily Signal that The Salvation Army has a vested interest in revealing its fundraising numbers.

The letter identifies “four instances” of other woke activities outside the “Let’s Talk About Racism” curriculum, he said without giving details, and calls on the church to “lead the charge in saying America is not a racist nation.”

“We are asking The Salvation Army to reconsider their ideology and to embrace what their true calling is, and that is to serve Christ and to serve the world by serving Christ,” Watson said.

An op-ed by Xu that appeared in December in The Wall Street Journal followed his similar piece Oct. 3 in The Daily Signal and criticized The Salvation Army for what he called “an internal coalition of woke ideologues.”

The church responded with a letter to the Journal and a YouTube video from Hodder, the national commander. The Salvation Army repeatedly has denied the allegations from Color Us United in press statements and media appearances.

Color Us United’s nationwide petition has attracted more than 18,000 signatures calling on the church to revoke the “Let’s Talk About Racism” curriculum.

The nonprofit advocacy group had set a Christmas deadline, which came and went, for The Salvation Army to apologize and state plainly that America is not a racist country.

“The deadline for their apology was for their sake, not for our sake,” Xu told The Daily Signal, adding:

Because that was when the media attention was at its highest. If they released something that said we fully do not believe America is a racist country, we fully renounce CRT [critical race theory] and we are going to get rid of our DEI [diversity, equity, and inclusion] programs because they don’t help any people in the inner-city communities or white coal miners—if they did something during that media cycle before Christmas, they would have a much likelier chance of recovering the support that they lost.

Xu said he estimates that Color Us United has spent about $90,000 in its efforts to change The Salvation Army’s mind. His group made use of Twitter, Facebook, and other online platforms in November and December to create public awareness about what it called the church’s adoption of tenets of critical race theory and support for other “woke policies.”

About 300 of those who signed the petition are Salvation Army officers, according to Color Us United.