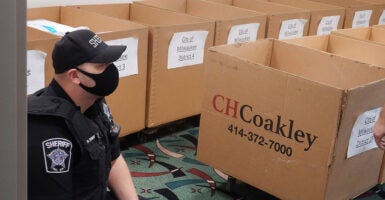 When Donald Trump questioned the legitimacy of the 2020 election, he was called a "sore loser." But when Joe Biden questions the 2022 midterms nine months in advance, the analysis changes. Pictured: Police stand guard over ballots from the November 2020 election before the start of a recount in Milwaukee, Wisconsin. (Photo: Scott Olson/Getty Images)

Former President Donald Trump questions the legitimacy of the 2020 presidential election. For half the country, this makes him a “sore loser” who promotes “conspiracy theories” and pushes “The Big Lie.” But when President Joe Biden in his recent press conference preemptively questions the legitimacy of the 2022 midterm elections nine months before they even occur, suddenly, the analysis changes.

A reporter asked the following question during Biden’s recent press conference: “Speaking of voting rights legislation, if this isn’t passed, do you still believe the upcoming election will be fairly conducted and its results will be legitimate?”

Biden said, “I’m not going to say it’s going to be legit. It’s—the increase and the prospect of being illegitimate is in direct proportion to us not being able to get these—these reforms passed.”

A political writer for The Hill offered this analysis, echoed by the hypocritical Democrats and media defenders of Biden’s Big Lie who castigated Trump’s alleged Big Lie: “The key distinction,” wrote Alexander Bolton, “is that Trump hasn’t been able to back up any of his fraud claims in court, and they have been dismissed by members of his own party.”

So, Trump based his assertions on thin air. Let’s look at just three states whose results Trump sued to overturn.

Respected Democrat, attorney, and Harvard professor emeritus Alan Dershowitz argued that election irregularities warranted a U.S. Supreme Court review and that the court would take up Trump’s challenge (it did not) and predicted that Trump would prevail.

Dershowitz said, “I do think that Trump will win the Pennsylvania lawsuit … namely, the lawsuit that challenges ballots that were filed before the end of Election Day but not received until after Election Day.”

Is Dershowitz a batty “conspiracy theorist”?

Delaware County official Christina Perrone, apparently referring to future elections, said, “This time it’s much different than last time because we’re going to have them sign oaths. They’re going to need W-4s and we need them to sign something allowing somebody else to pick up. So, we’re going to actually follow the law fully this time.”

The secretary of state sent vote-by-mail applications to every registered voter without requiring the voter to request it. The Michigan Supreme Court declined to hear the challenge, but in a split decision based on procedural grounds, the state court of appeals ruled 2-1 against Trump’s lawsuit.

Wisconsin: Trump lost the state by fewer than 21,000 votes.

The Wisconsin Supreme Court ruled 4-3 on procedural grounds against Trump. But in her dissent, the chief justice of the Wisconsin court disagreed: “A significant portion of the public does not believe that the November 3, 2020, presidential election was fairly conducted. … Four members of this court throw the cloak of laches over numerous problems that will be repeated again and again until this court has the courage to correct them.”

One of the many “problems” to which the dissent referred was the use of ballot drop boxes.

A nutty judicial dissent? About ballot drop boxes, a Wisconsin judge recently ruled against their use in upcoming elections. Waukesha County Circuit Court Judge Michael Bohren said, “It’s all good and nice, but there’s no authority to do it.”

To be sure, Trump lost all three state cases. But losing close court decisions and describing all of Trump’s legal challenges as meritless “Big Lies” based on “conspiracy theories” represents yet another example of the media and Democrats’ blatant unfairness to Trump and to sane and sensible Americans who understand why he continues to complain.