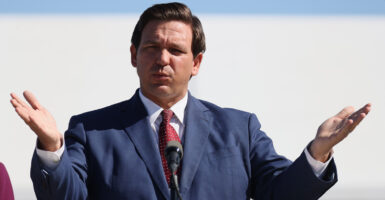 Florida Gov. Ron DeSantis, pictured Jan. 6 during a press conference in Miami Gardens, is under attack for proposing an agency to go after election-related crimes. (Photo: Joe Raedle/Getty Images)

Florida Gov. Ron DeSantis has a good idea with his budget proposal to create an “election crimes agency” that would “investigate election crimes and irregularities and make referrals for further legal action directly to a statewide prosecutor.”

Florida should implement it, and other states should follow. In fact, state legislators should make sure that a statewide prosecutor’s office has jurisdiction to prosecute all such election cases, especially when local prosecutors fail to act.

Ensuring the integrity of elections and protecting voters from fraud is simply too important to leave the investigation and prosecution of crimes that subvert elections to the whims of local prosecutors. All too often, they lack the training or aren’t interested in pursuing such cases.

This problem has gotten worse with the election of rogue prosecutors with funding from the radical left, such as Monique Worrell and predecessor Aramis Ayala in Florida’s Orange and Osceola counties. Such prosecutors  aren’t interested in actively prosecuting many serious crimes, including election fraud.

It should come as no surprise that the DeSantis proposal is drawing ire from left-wing journalists and activists, who repeat their theme that election fraud isn’t a serious issue and doesn’t merit any sort of concentrated attention and mitigating effort.

During a November press conference, Florida’s Republican governor unveiled his proposal to allocate $5.7 million to operate an election crimes agency.

In his State of the State speech Jan. 11, DeSantis emphasized the importance of such an office to ensure “that our citizens have the ability to participate in elections that are secure and transparent.”

Vehement opposition to claims of election fraud led media outlets to generate a storm of articles decrying what they say is DeSantis’ ill-intentioned commitment to an imaginary issue.

A recent article in The Washington Post painted the governor’s initiative as heavily partisan and a waste of money, citing individuals who claimed that the proposed office would be equivalent to an “elections SWAT team,” as if that would be a bad idea.

Similarly, the Tampa Bay Times highlighted the supposed extreme rarity of election fraud and criticized the disproportionate size and impracticality of such an agency. The reporter’s opinions, which aren’t supposed to be in a news story, are immediately evident when he refers to The Heritage Foundation as promoting “legislation restricting voting access,” which is a blatant lie.

We at Heritage promote policies that protect voter access and the integrity and security of elections. (The Daily Signal is Heritage’s multimedia news operation.)

I was interviewed by reporters for both the Post and the Times, and what they left out of their articles tells you everything you need to know about media bias in covering this issue.

For example, the Post’s story says “critics note that state attorneys and local police are already in place to investigate alleged election crimes.”

But the problem, as I told the reporter, is that too many prosecutors and local police ignore such crimes when they occur and don’t prosecute them. The reporter didn’t have to take my word for that. I referred her to a report directly on point that was released in November by Public Interest Legal Foundation (on whose board I serve).

For the report, titled “Safe Harbor: How Many Potential Election Crimes Languish in Florida Prosecutor’s Offices,” Public Interest Legal Foundation used Florida’s sunshine law to request information from 10 counties on all of election officials’ criminal referrals arising out of the 2020 election.

Nine counties responded, saying they had sent 156 referrals to local prosecutors about potential criminal violations of state election law, including instances of double voting and aliens registering and voting.

The foundation then researched Florida’s “criminal databases and court records where available and found little follow-through from prosecuting authorities,” which is a polite way of saying prosecutors have done nothing about these apparent crimes.

One of the most ironic quotes in The Washington Post’s story is from Hillsborough County prosecutor Andrew Warren, an elected Democrat, saying that the amount of fraud in Florida is “a microscopic amount” and that the governor’s idea is “not a serious policy proposal.”

Ironic, because Hillsborough was one of the 10 counties from which Public Interest Legal Foundation sought information. The county informed the foundation of its policy “to not alert prosecutors to potential violations” of state election laws.

No wonder Warren thinks fraud is “microscopic” in his county.

I gave the Tampa Bay Times reporter the same referral to the “Safe Harbor” report, which includes stark evidence of Florida prosecutors’ failure to pursue election crimes even when handed the cases by county election officials.

No mention of a report that helps support the need for such a state office was made in the Times’ story, either. I guess it just took too much ink to refer to 156 criminal referrals that haven’t been acted upon.

I also referred both newspaper reporters to another Public Interest Legal Foundation report that likewise shows the need for what DeSantis is proposing: an office of individuals trained and experienced in state election laws who know how to investigate and prepare cases for prosecution by state prosecutors dedicated to protecting the sanctity of the voting process.

That 2020 report, titled “Critical Condition,” compared the voter registration lists of 42 states, including Florida, as well as voter records from the 2016 and 2018 elections in those states.

The report found over 144,000 cases of potential election crimes, including double voting by individuals registered in more than one state or registered twice in the same state; votes from deceased individuals; and individuals who registered and voted from nonresidential addresses such as gas stations, casinos, and restaurants.

Not a single election or law enforcement official in any of these states has requested that Public Interest Legal Foundation send them the names of voters in their states who may have violated the law, so they could be investigated. Not one.

As I expected, neither The Washington Post nor the Tampa Bay Times mentioned the “Critical Condition” report either. Doing that might actually lend support to what DeSantis is trying to do, and you certainly can’t have that in the mainstream media propaganda world.

Clean and honest elections are the heart and soul of a functioning democratic republic. The criticism of DeSantis for trying to ensure that reality is unwarranted and unfair.