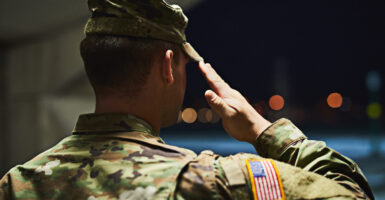 Public trust in military officers has declined dramatically over the last two decades. This will undermine military recruiting, frustrate the ability to secure the necessary funding for the military, and fundamentally harm U.S. national security. (Photo: PeopleImages/Getty Images)

Gallup recently released a poll describing how American’s confidence in military officers had declined to its lowest level since it began measuring in 2001. The big news was that between 2017 and 2022, Americans who believe military officers possess “high ethics” declined by a full 10 points, down to 61%.

An optimist could see this as unfortunate but tolerable, since military officers remain one of the most respected professions, falling only behind medical professionals and grade-school teachers. A more candid appraisal, however, would see this for what it is: a vote of declining confidence by America in its oldest and heretofore most trusted institution. The military needs to make the necessary course corrections to address this situation or be prepared to endure the consequences.

We should not be terribly surprised by these results. The public disaster that unfolded in Afghanistan in August shook Americans to their core. Many to this day cannot understand how the military was so unprepared for the sweep of the Taliban across Afghanistan. They do not understand how U.S. forces were forced to conduct an evacuation out of a civilian airport unsuited for that purpose and why America relied on terrorists to provide airport security.

Despite moments of candor—such as Chairman of the Joint Chiefs of Staff Gen. Mark Milley’s description of the Afghan war as a “strategic failure”—multiple days of congressional testimony failed to shed much light on these questions, and based on these poll results, Americans are not willing to let senior military leaders completely off the hook for the debacle.

But it probably isn’t just Afghanistan that led to this decline.

Before Afghanistan there was a growing sense that senior military officers are becoming more political, and that does not sit well with Americans.

While it started well before the 2016 presidential campaign, it felt like a line was crossed when retired general officers joined candidates on stage at both the Republican and Democratic national conventions.

But of late, public concern has expanded to encompass officers serving on active duty.

Similarly, last year when the chief of naval operations, Adm. Michael Gilday, included the book “How to Be an Antiracist” with its pronouncements “capitalism is essentially racist” or “[w]hen I see racial disparities, I see racism” on his professional reading list, it landed with some as more political virtue signaling than a genuine recommendation for professional military reading.

The decline in trust occurred over four years, so without more information it’s impossible to know what precisely caused it.

Military recruiting is already in trouble. The Air Force has declared it is going to have a tough time meeting its targets for 2022, and the Army is already increasing bonuses to boost lagging numbers. Recruiting depends on the perception a potential recruit’s family and friends have of the military, and declining trust in military leaders will make it harder to persuade young people to join.

Furthermore, Congress and the American people trust military leaders to accurately portray the state of the U.S. military and success or failure in overseas commitments. Every spring, four-star admirals and generals are summoned to Capitol Hill to testify on their respective services and commands. If Congress and the public come to doubt the veracity of their testimony, it will undermine national security.

Like other federal agencies, the Defense Department has political appointees, in the Pentagon’s case, over 40 of them. It is understood they are there to support the president’s agenda. There are also over a hundred generals and admirals working alongside the political appointees. It is common for a political appointee, such as a service secretary, to refer to the chief of staff of their service as their “battle buddy”—a special term of endearment in the military. And senior officers often make similar references to their civilian bosses.

Indeed, it is beneficial they have an effective working relationship. But they are not “buddies,” and such characterizations help no one.

There is a bright line that must never be crossed between appointees and senior military officers, who must remain above the fray of politics to gain and maintain the nation’s enduring trust.

Before any senior military officer is confirmed by the Senate, they are required to affirmatively answer the question: “Do you agree, when asked before this committee, to give your personal views, even if your views differ from the administration?”

Often, this requirement places senior military officers in a conundrum, because contradicting the administration results in their removal or elimination for further advancement. Some officers navigate that dilemma by choosing a less than fulsome answer.

Others take a harder road. Two examples of the latter come to mind.

In 1980, testifying before Congress, Army Chief of Staff Gen. Edward “Shy” Meyer reported the U.S Army was essentially “hollow,” and that stateside Army companies and platoons had been “zeroed out.” The headlines his statement created were not welcomed by the administration.

When in 2003 Congress asked Army Chief of Staff Gen. Eric Shinseki how many troops it would take to stabilize Iraq, he gave his personal, professional opinion of 500,000. It was not what the administration wanted to hear, and the deputy secretary of defense repudiated his testimony. In time, however, his judgment was vindicated.

If the U.S. military is going to reverse this dangerous decline in confidence, it is going to have to look inward and resolve to earn back the trust of Americans using the examples of Meyer and Shinseki to guide it.

Senior military officers must do everything they can to remain apolitical and tell Congress and the American public the inconvenient hard truths. As in most cases, the right path is normally going to be the most difficult one. But that’s the best choice for America.