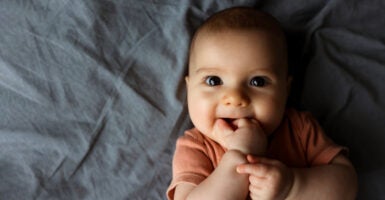 Roe v. Wade must be reversed because every life, born and unborn, has value and deserves his or her right to live. (Photo: Vera Livchak/Getty Images)

Today, thousands of pro-life advocates around the country gather in Washington to stand up and support the sanctity of life in America.

Defending life has been one of the most meaningful fights I have contributed to during my first year in Congress. I have had the opportunity to stand with pro-life colleagues from across the country by supporting legislation, joining pro-life discussions, and fighting against the radical pro-abortion Women’s Health Protection Act,  which would codify Roe v. Wade into law.

I joined Rep. Chip Roy, R-Texas, in introducing the Protecting Life on College Campuses Act. This legislation would prohibit awarding federal funds to a higher education institution that provides abortion drugs or abortion care to students or employees of that institution. It would save lives, protect women, and respect the conscience of American taxpayers.

The abortion industry purposefully preys upon young women facing unexpected pregnancies by withholding information from them and fighting against their ability to receive a sonogram. Our culture should embrace life and support women in times of crisis, not coerce them into killing their child.

The original Hyde Amendment was introduced by Rep. Henry Hyde of Illinois, and passed in 1976 with overwhelming bipartisan support: 312-93. All Democrat presidents since Jimmy Carter have reaffirmed Hyde’s standing, but for the first time in 40 years, the Hyde Amendment was excluded from the spending bill introduced in Congress. The fight for life in the United States has never been more important than it is today.

Forty-nine years ago, the Supreme Court failed to honor the most basic human right in its Roe v. Wade decision. Roe must be reversed because every life, born and unborn, has value and deserves his or her right to live.

Today, I march for all the unborn children in America, for women across the country who have found themselves abused by the abortion industry, and for the end of Roe v. Wade. I look forward to always defending life during my time in Congress and I will not stop using my voice to speak on behalf of those who have no voice.