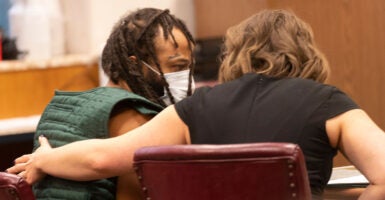 Darrell Brooks appears in Waukesha County Court on Nov. 23 in Waukesha, Wisconsin, charged with killing six people and injuring dozens more by driving through a Christmas parade with his sport utility vehicle two days earlier. He had been released from jail only 72 hours earlier on a $1,000 bond after facing charges of attempting to kill the mother of his child. (Photo: Mark Hoffman/Getty Images)

Doug Collins is a former U.S. representative from Georgia's 9th Congressional District. He served on the House Judiciary and Rules committees, and was vice chairman of the House Republican Conference.

It’s no secret that 2021 was one of the most violent years in recent history for many U.S. cities.

From coast to coast, cities including Philadelphia; Louisville, Kentucky; Albuquerque, New Mexico; and Portland, Oregon, all saw their highest homicide rates in decades.

While this spike in violence has sparked a debate about the right response, there is one consensus: The cash bail status quo is unsustainable.

Just look at the deadly vehicular attack on the Waukesha, Wisconsin, Christmas parade last year. The madman behind the wheel, Darrell Brooks, shouldn’t have been free in the first place. He had been released only 72 hours earlier on a $1,000 bond after attempting to kill the mother of his child.

But despite the consensus that this tragedy could have been prevented, I’ve seen too many people mischaracterize Brooks’ low cash bail as a failure of “bail reform.”

In reality, the problem is that we haven’t reformed bail enough, and instead we remain stuck with a long-perpetuated culture of reliance on wealth-based detention.

Making defendants pay money to earn their freedom before trial is supposed to make them follow the rules and appear for their hearings. But that simply does not reflect reality. In fact, these presumptions about cash bail were debunked by research long ago.

The unsettling truth is that the failure in the Brooks case rests with the Milwaukee County district attorney. The district attorney’s office ignored the indicators found in the risk-assessment tool the office employed, which categorized Brooks in the highest tier of threat to public safety.

The prosecutor’s office failed to follow its own policies, and bloodshed quickly followed.

Across the country, individual judges and prosecutors have mistaken their personal, rogue ideas for righteous criminal justice reform. Misguided action, however well-intended, will invariably result in tragedy.

And it doesn’t stop with individuals.

Liberal states and jurisdictions have attempted to correct their courts’ heavy dependence on cash bail and have done it badly. These poorly thought-out and executed attempts at reform have given a bad name to the criminal justice reform movement. But rather than giving knee-jerk reactions and simply criticizing these jurisdictions, conservatives should refuse to take a back seat to liberals or anyone else who claims to have a monopoly on responsible bail reform.

If conservatives fail to carry the mantle on this issue, district attorneys like New York County’s Alvin Bragg will.

Right now, the false belief that cash bail keeps communities safe presents one of the biggest risks to public safety.

Just look at the killing of Arizona high school economics teacher David Scott last May 1. The suspect, 18-year-old Maurice Diaz-Casales, had already been arrested for violent crimes and released a few months earlier on a $100,000 bond. Despite what had seemed to be a sufficient sum to keep this violent defendant behind bars, he made bail and wrought more suffering on the Tucson community.

From Wisconsin to Arizona, we need responsible bail reform that focuses on public safety. Those reforms include giving more tools to prosecutors and judges to preventatively detain the worst of the worst criminals—and quickly release the mothers and fathers, sons and daughters who pose no threat to their communities.

That’s only possible by allowing courts to differentiate between those violent offenders of society and the one-time or nonviolent offenders who take up the majority of our courts’ dockets.

There will always be bad actors such as Bragg, who said he wants to reduce the prison population by not enforcing the law and to treat serious violent crimes as nothing more than a mere misdemeanor. But his so-called solutions just solve one problem by creating another.

That’s why it is incumbent on us as conservatives to offer real reform solutions that are based in the Constitution and that prioritize public safety. We have a track record to prove we can do this, from the First Step Act that I was proud to fight for with the support of then-President Donald Trump, to all the Republican-led legislatures across the country that have passed meaningful reforms in the past several sessions.

There is no easy answer when it comes to solving criminal justice problems, but together we must put the safety and security of our nation at the center of our work to reform the system.