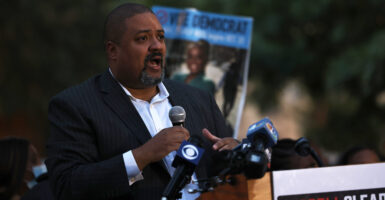 Alvin Bragg, now a district attorney in New York, speaks during a Get Out the Vote rally at A. Philip Randolph Square in Harlem on Nov. 1, in New York City. Bragg ran on a progressive platform and declared in a "day 1 memo" that many crimes in new York will no longer be prosecuted. (Photo: Michael M. Santiago/Getty Images)

All criminals are welcome appears to be the policy of the New York district attorney.

With the departure of New York Mayor Bill de Blasio and the election of Eric Adams, a Democrat who at least rhetorically voiced support for the police and law and order, some hoped that worrying crime trends in New York City would be reversed.

Newly-elected Manhattan District Attorney Alvin Bragg released a “day 1 memo” highlighting how various crimes—some quite serious—will no longer be prosecuted under his leadership.

One of the crimes his office won’t prosecute is armed robberies of businesses. Suspects in those cases who make off with less than $1,000 in stolen goods will now be charged with the lesser crime of petty larceny, a misdemeanor.

Among the other crimes his office will no longer prosecute are resisting arrest, fare beating, prostitution, and trespassing. Basically, the only criminals who will now face serious jail time are murderers.

“Even when Bragg does intend to seek jail sentences, the penalties will not be stiff,” wrote Seth Barron at City Journal. “Bragg says that the maximum sentence sought for any offense will be 20 years, and that his office will never seek life without parole. If 20 years is the maximum sentence for the worst offenses, expect a severe discount on sentences for other offenses across the board.”

If these policies seem familiar, that’s because they mirror a path charted by other radical, left-wing district attorneys across the country, like Chesa Boudin in San Francisco and Larry Krasner in Philadelphia.

These district attorneys have made policing nearly impossible, as even in the cases when an already stretched thin and beleaguered police force is able to arrest criminals, they are very soon put back out on the street.

Things aren’t working out well in those cities. Violent crime is soaring, and other types of crime—Like mass retail looting—are also on the upswing.

The situation is so terrible in San Francisco that Mayor London Breed, who defunded the police, recently called for an end to the “reign of criminals and the city,” and announced that the city would pursue more aggressive policing.

The problem remains that whatever the mayor and police department do to clean up criminality, those measures can be easily undermined by an out-of-control district attorney who simply refuses to bring criminals to justice in the name of social justice.

That’s what may soon happen in New York.

Like many big, blue metropolitan areas, New York has been hit with a massive surge in violent crime since the summer of 2020. Yet, despite the trend, New York has generally been safer than other cities, thanks to the crime fighting policies of former New York Mayor Rudy Giuliani and others who cleaned up Gotham in the 1990s.

It seems many have forgotten the lessons of the very recent past.

The New York district attorney said that his policies were meant to “marry fairness and safety.” But given the details of his memo, it’s clear this marriage is a sham.

“I have studied these policies and I am very concerned about the implications to your safety as police officers, the safety of the public and justice for the victims,” she wrote in an email to police officers.

Should anyone be surprised though? Bragg ran on an explicitly progressive message. He is just carrying progressive ideas about defunding the police and “restorative justice” through to their logical conclusions.

The evidence is already coming in that criminals are learning that they have the keys to the city, and there’s little the justice system will now do about it.

A New York Post report on Wednesday highlighted a case in which Manhattan Criminal Court Judge Jay Weiner told an ex-convict being charged with misdemeanor petit larceny that his case “two weeks ago would have been charged as a robbery,” and that he was “lucky” that he wouldn’t face a long prison sentence.

The man, who had a lengthy criminal record, threatened a drug store owner with a knife and allegedly stole thousands of dollars in items.

Naturally, he didn’t show up to his follow-up court appearance after being released without having to post cash bail. New York abolished bail for minor crimes in 2019. Not great when almost all crimes are now considered minor crimes.

It’s not exactly a wild prediction to say that other hardened criminals in the city will likely realize that today can be their lucky day, too.

Unfortunately, this is not just a problem for New Yorkers or people living in cities with other radical district attorneys and irresponsible political leaders. Our cities becoming hives of violence and criminality will affect everyone. Like an infected wound, the lawlessness will allow criminality to spread as more dangerous people are let out on the street to act with impunity.

The progress this country made on crime in the last few decades will very soon evaporate and we will have to go through the arduous process of setting things right.

We all pay when progressive fantasies about restorative justice and crime become reality, and reality comes back to slug us all in the face.