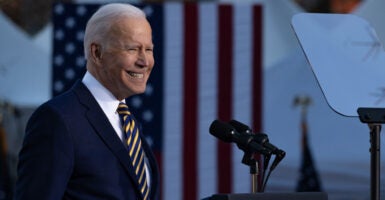 "Do you want to be on the side of Abraham Lincoln or Jefferson Davis?” asked President Biden during his speech on voting Jan. 11 at the Atlanta University Center Consortium in Atlanta, Georgia. (Photo: Megan Varner/Getty Images)

These are three of the more charitable adjectives that describe President Joe Biden’s execrable speech on Tuesday. He flew to Atlanta to promote so-called “voting rights” legislation that would nationalize state election laws and codify many of the dangerous measures that “temporarily” loosened ballot security in 2020, as COVID-19 terrorized America.

Biden could have laced his words with honey. Instead, Biden bombed a vinegar factory.

So, Biden argues, if one disfavors mass mail-in ballots—because they break the chain of custody that links the casting, collection, and tabulation of ballots—then one is just like Wallace, Alabama’s former Democrat governor. Wallace’s slogan was “Segregation now, segregation tomorrow, segregation forever!” He stood in a doorway in June 1963 to prevent black students from integrating the University of Alabama.

Bull Connor sounds like a rodeo star. Hardly. But as Birmingham’s commissioner of public safety, Theophilus “Bull” Connor used canines, not bovines. He sicced barking, snarling, police dogs on peaceful, mainly black civil rights protestors in May 1963. He also used fire hoses to blast demonstrators across sidewalks and into gutters.

Surely, such a villain was a racist Republican. Au contraire, in 1960, Bull Connor was elected one of Alabama’s two members of the Democratic National Committee.

Banks, hotels, airlines, and other businesses routinely ask Americans of all races to present photo ID. Washington, D.C. Mayor Muriel Bowser recently required residents to carry vaccination cards and photo ID whenever they leave home. An August Honest Elections Project survey of 1,200 voters found that 81% favored voter ID, including 77% of blacks. Biden asserts that these millions of Americans are just like Confederate States President Jefferson Davis, a slaveowner whose troops killed 364,511 Union soldiers in the Civil War, to preserve the evils of slavery.

Biden also invoked “the grand dragon of the Ku Klux Klan” and Andrew Goodman, Michael Schwerner, and James Chaney. After vanishing for 44 days in the summer of 1964, the bodies of these Congress of Racial Equality workers were found stuffed into an earthen dam in Mississippi. The KKK killed them. Biden associates those who want relocated and deceased voters removed from voter rolls with the racists who murdered Goodman, Schwerner, and Chaney.

Biden said that he would defend “our democracy against all enemies—foreign and, yes, domestic.” So, Biden considers domestic enemies the millions of Americans who want election integrity.

Biden is the same man who said at his inauguration: “With unity we can do great things.” Biden’s idea of unity is to slice an American flag in two with a machete.

“Perhaps the president went a little too far in his rhetoric,” Sen. Richard Durbin of Illinois told CNN. Racial arsonist Al Sharpton told MSNBC that Biden did not build support. “I think he gave a ‘You’re going to Hell’ speech.”

Biden’s Vote Fraud Instruction Manual of 2022 will not reach his desk unless he can persuade two Democrat senators, Kyrsten Sinema of Arizona and Joe Manchin of West Virginia, to torpedo the legislative filibuster.

At least 75 million Republicans and millions more independents and thinking Democrats want to make it easy to vote but hard to cheat. Insulting these Americans by aligning them with these revolting Democrat bigots was no way for Biden to win these two senators he desperately needs to enact his dodgy vote-fraud facilitation bill.