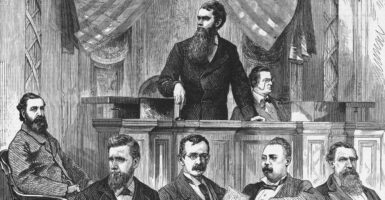 Then-Sen. Thomas Ferry, R-Mich., the Senate president pro tem, announces the results of the 1876 presidential election between Rutherford B. Hayes and Samuel Tilden. The final vote, which declared Hayes the new president, was 185 to 184. (Photo: Bettmann/ Getty Images)

Members of Congress attempted to disqualify state Electoral College votes in four of the past six presidential elections using an ambiguous 1887 law.

None of those objections, made in joint sessions of Congress since 2001, were successful in reversing a presidential election result. The election objections that stand out in history came last year, preceded by the Capitol riot last year.

Now, a bipartisan group of senators are working on a plan to prevent future objections to counting electoral votes—and in the process could preempt Democrat-backed legislation to federalize elections, while likely also preserving the Senate filibuster.

The Electoral Count Act of 1887 was enacted to give Congress a means to settle a disputed presidential election, by allowing members to dispute the validity of electoral votes.

Here are four keys to understanding the law and what impact reform would have on the future.

The existing law gives too much centralized power to Congress over elections, said Tara Ross, a lawyer and author of “The Indispensable Electoral College: How the Founders’ Plan Saves Our Country From Mob Rule.”

“Congress grabbed too much power in this law that the Constitution did not give it,” Ross told The Daily Signal. “The more you centralize something, the easier it is to control an election. The benefit of the Electoral College is that it takes power out of D.C.”

Congress passed the Electoral Count Act of 1887 in part as a response to the 1876 election stalemate between Republican Rutherford B. Hayes and Democrat Samuel Tilden, after four states—South Carolina, Florida, Louisiana, and Oregon—sent Congress competing sets of electoral votes.

To give Congress a means for settling the matter, the 1887 law required a joint session of Congress to count the Electoral College votes from each state and stipulated that the vice president, as presiding officer, would certify the results.

However, if an objection to the count is declared in writing by a House member and signed by at least one senator, the joint session would temporarily adjourn, and both the House and the Senate would be required to debate the objection for two hours. The chambers would vote on the lawmakers’ objection before reconvening in the joint session.

After the 2020 election loss to Joe Biden, then-President Donald Trump’s lawyers argued that the law could be used to reject state electoral votes from states where fraud was suspected and that then-Vice President Mike Pence had the authority as presiding officer in a joint session of Congress to reject disputed electoral votes. Pence did not comply, and the joint session of Congress certified the victory.

2) Which Senators Back Reform?

“I would like personally to see the language change, so that it’s clear that the vice president is performing just the ministerial role and does not have the authority to change our block counts from states,” Collins told Axios.

Senate Minority Leader Mitch McConnell, R-Ky., said, “It obviously has some flaws. And it is worth, I think, discussing,” according to Politico.

There hasn’t been any draft proposal to assess, said Hans von Spakovsky, manager of the Election Law Reform Initiative at The Heritage Foundation.

“So far, I have not seen any proposed language that shows how they want to change [it]. So, I don’t know,” von Spakovsky told The Daily Signal, the news outlet of The Heritage Foundation. “If and when we see draft language, then we can review and analyze whether we think it’s an improvement or not. Nobody has really said what they want to do with it. The problem is, I wouldn’t want them agreeing to a bad change in order to block that legislation.”

3) Where Do Democrats Stand?

“That is not a substitute for the protections that are included in the Freedom to Vote Act and the John Lewis Voting Rights Advancement Act. That is why our focus is on those,” White House press secretary Jen Psaki said Thursday.

“The McConnell plan—that’s what it is—is unacceptably insufficient and even offensive. Some scorekeeping matters little if the game is rigged,” Schumer said in a floor speech Thursday. “And as we know too well, state legislatures are working day and night to undermine our democratic process from the get-go, by empowering partisans to potentially say which ballots count and which do not. What good is it to accurately count a result that’s compromised from the start?”

Schumer didn’t cite examples of what state legislatures he was referring to, but in 2021, he criticized voter ID laws passed in Georgia, Texas, and other states. His own state of New York has some of the strictest voting laws in the country.

Democrats have sought to cloak the federal election-takeover bills in the Jan. 6 riot.

The Economist editorialized Friday about the Democratic proposals, favoring the reform of the Electoral Count Act as a means to “help prevent another riot.”

“Whatever the merits of these [Democrats’] bills, they are an odd first response to the insurrection of January 6th, 2021. Record numbers of Americans voted in 2020. Long queues and pandemic-driven confusion notwithstanding, the problem was not access to the ballot; it was the attempted chicanery with the counting. The Electoral Count Act of 1887 … which tries to set guidelines for how Congress settles disputed results in presidential elections, is vague, confusing, possibly unconstitutional—and ripe for reform.”

The Wall Street Journal separately editorialized, “We agree the riot was disgraceful, but then why not rewrite the law that encouraged Donald Trump’s supporters to think Congress could overturn the 2020 election?”

Ross isn’t certain reforming or even scrapping the law would definitely prevent another such incident from occurring.

“There would still be a limited role for Congress to play,” Ross said.

But keeping Congress limited to the constitutional role of counting votes—rather than participating, such as by challenging legitimacy—is key, she said.

“If someone did want to steal an election—and nothing is impossible—when elections are decentralized, it makes it much more difficult to steal,” Ross said.

4) When Has Act Been Invoked?

A year ago, after the riots were cleared and Congress reconvened in a joint session, there were 139 House Republicans who objected to states Biden won and eight Republican senators supported those objections, forcing floor debates. The objections were easily defeated, however, and Biden was certified the winner, as Pence presided.

Objections have not been uncommon after elections.

In 2005, Sen. Barbara Boxer, D-Calif., sponsored a House objection to certifying electoral votes for reelected President George W. Bush. After this forced debate, both the House and Senate voted against the objection.

In 2017, House Democrats made 11 objections to accepting state votes in favor of Trump. Then-Vice President Biden presided over the joint session that certified Trump’s victory.

In 2001, House Democrats made 20 objections to certifying votes for Bush. Those objections were not debated, since no senators sponsored them.

Before that, one has to go back to the 1960s for a time when the Electoral Count Act was relevant, and Richard Nixon loomed large in both instances.

After the 1968 presidential election—in which Nixon, a Republican, defeated Democrat Hubert Humphrey—a Democrat in the House and another in the Senate objected to a faithless elector from North Carolina who decided to vote for independent candidate George Wallace instead of Nixon, who won the state. After debate on the floor, the objection was defeated.

Eight years earlier, after the 1960 election, when Democrat John F. Kennedy beat Nixon, then the vice president, the results in Hawaii were extremely close in its first U.S. presidential vote after becoming a state the year before, with fewer than 200 votes between the candidates.

The state’s governor certified Nixon as the winner, but a state judge determined Kennedy won. So, the state had two sets of electors. Though close nationally, the state’s three electoral votes would not have made a difference. As Democrats were prepared to make an objection, Nixon, as presiding officer in the joint session of Congress, called for unanimous consent to accept the Democratic slate of electors.