Biden’s War on Unvaccinated Is Un-American 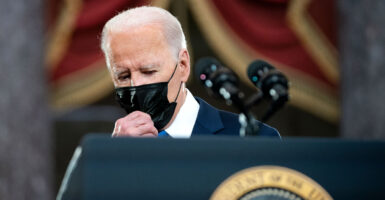 President Joe Biden—seen here Thursday in Statuary Hall of the Capitol giving what some saw as a divisive, rather than unifying, speech on the first anniversary of the Jan. 6, 2021, Capitol riot—has also been divisive on COVID-19 vaccinations, pitting the vaccinated against the unvaccinated. (Photo: Greg Nash/Getty Images)

The unpredictability of COVID-19 shocked the entire world.

In the United States, we were a country already divided due to politics and decades of cultural conflicts. COVID-19’s carnage could have sparked a moment of national unity in the battle against this unknown foe. Unfortunately, it has had the opposite effect, and it has now joined the pantheon of politically polarizing subjects.

Political leaders from both parties share responsibility for our current predicament. We may disagree on who or which side is to blame for more or less of it, but we should all agree that our political leaders have failed us miserably.

For the sake of this column, I want to concentrate on President Joe Biden. I’m concerned that the president is slipping into a rhythm of pitting one group of Americans against another, something he vowed not to do as a candidate.

If you’re wondering what I’m talking about, it’s the president’s relentless juxtaposition of the unvaccinated against the vaccinated. While I appreciate that the president’s first responsibility is to keep Americans safe, I think that this may be accomplished without further dividing our society.

You can urge and advise Americans to be vaccinated while simultaneously respecting the rights of those who choose not to. I’m not pushing anybody to be irresponsible or dangerous, but we do live in a society where we should respect the rights of individuals who disagree with us on this issue, which includes their freedom to refuse vaccinations.

Regardless of one’s political convictions, declaring war on and condemning “otherly” Americans is disturbing and un-American. It also provides a new subject for Americans to be divided over at a time when we should all be working together to defeat COVID-19 and move on as a unified nation, something that seems foreign these days.

Rhetoric from Democrats, especially Biden, has been cause for concern, not just for our country, but also for the Democratic Party’s future.

The Biden administration recently posted what appeared to be a death wish for those who are unvaccinated, a prediction that it appears to hope will come true: “For the unvaccinated, you’re looking at a winter of severe illness and death for yourselves, your families, and the hospitals you may soon overwhelm,” it wrote.

Such vile rhetoric does not unify Americans, nor does it persuade the unvaccinated to become vaccinated; rather, it further divides Americans. It remains to be seen if such a remark is true or not, but it is heinous to make such a bold and repulsive forecast and treat it as fact when it has not yet occurred.

Fortunately, not everything is terrible. While Biden has undoubtedly caused considerable division and failed to unite Americans in many respects, it would be dishonest not to acknowledge his legitimate attempts to unite our country and contribute to its success.

Recently, Biden has taken a stand against government shutdowns to prevent the spread of COVID-19, something that evidently has not had a great long-term effect on that spread. For the first time, Biden appears to be looking at the facts, rather than playing party politics, and he is finally allowing individuals to enjoy their individual liberty, rather than having them controlled by the government.

In any case, despite the good news from Biden on shutdowns, the president’s stance on COVID-19 vaccine mandates overall has political ramifications that I don’t believe will favor Democrats in the fall 2022 midterm elections.

Many Americans dislike the prospect of being threatened because of their beliefs. For one, shaming and intimidating them and treating them as second-class citizens won’t just fail to bring understanding, but it will only increase suspicion and conflict in a society already torn by it.

People generally distrust authority in general, and now, when the government is telling you that you can’t have the beliefs you desire, it’s only logical that such rhetoric will not only sow more distrust, but also generate more adversaries for them.

Americans have always enjoyed having the freedom to choose whatever options they desire, and being given the choice of taking the vaccine without any form of compulsory force is something that is ingrained in us as Americans.

However, when government bureaucrats try to force something down Americans’ throats without giving them a choice, you’ll see reluctance, which is exactly what Democrats are seeing now. Their tactic isn’t working, and the more vaccination requirements are pushed, the more Americans are saying, “Enough is enough.”

Millions of people in the United States have been vaccinated, and many of them are now declaring themselves done. They won’t take a booster shot, or any more shots for that matter, since they don’t believe it will work.

Democrats have no one to blame but themselves for their dysfunctional messaging to voters. The issue at the helm is that we now confront a unique challenge unlike any other, because despite how bad things were in the past, there was always hope and a way out, yet looking at our current trajectory, it appears as if we’re trapped in an indestructible cage.

Regardless of where Americans stand on the subject, we need leadership that can heal our divisions, unite us, and forge a plan to defeat COVID-19. I’ll be the first to say that this method isn’t simple, but it’s our political leaders’ and the president’s responsibility to sort out hard issues; after all, that’s why we elected them.

Biden, on the other hand, has chosen a different path, and his party will pay the price in 2022.