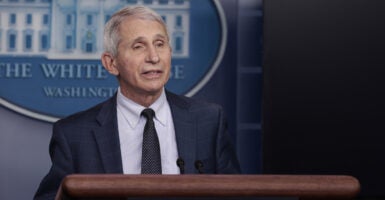 Dr. Anthony Fauci, the director of the National Institute of Allergy and Infectious Diseases, has been given a lot of power—and power tends to corrupt. Pictured: Fauci gives an update on the COVID-19 omicron variant during the daily press briefing at the White House on Dec. 1. (Photo: Anna Moneymaker/Getty Images)

I assume Fauci is a top-notch scientist. My brother worked with him at the National Institutes of Health and respected him.

But power tends to corrupt, and Fauci has been given a lot of power.

His department directed tax dollars to the Wuhan Institute of Virology to modify coronaviruses in bats.

When Sen. Rand Paul, R-Ky., asked Fauci about funding “gain of function” research, experiments that try to learn more about a disease by making it more contagious or deadly, Fauci denied it, saying, “Sen. Paul, you do not know what you are talking about!”

But it turns out that Paul did know what he was talking about.

The Wuhan experiments Fauci funded did not directly cause COVID-19. We know that because the molecular structure of the altered viruses is different.

But gain-of-function research is risky and deserves public discussion.

I like that Paul, unlike most of his colleagues, pushes for that discussion. In my new video, he says he does this because it’s important “not only for assessing what happened and how this pandemic arose but making sure it doesn’t happen again.”

Originally, “experts” claimed COVID-19 came from animals in the wet market in Wuhan. But now “experts” say that COVID-19 might have come from a lab.

“This has become so polarized that you’re either completely in the bag with Fauci or completely opposed to him,” says Paul. “There is no one wanting to actually get to the truth of where this came from or understand that this could happen again.”

I ask Paul what he thought about Fauci’s flat dismissal of anyone who criticizes him.

“That’s an incredibly arrogant attitude,” replied Paul. “Reminiscent of the medieval church [where] the government representative decided what was science … Any time you have government dogma saying they are science, or government bureaucrats who claim that ‘this is the one and perfect truth’ … we should run headlong away.”

Today our government wants to mandate vaccines in private workplaces. The administration claims that’s necessary because not enough people are vaccinated.

Paul calls that a “big lie.”

“We are not stupid. The whole idea of collectivism is that people are too stupid to make their own decisions. Individuals will make rational decisions and do.”

I push back. “Some people are stupid. Is there no point when the government does have a right to force a vaccination?”

“I’m not for ever forcing someone to take medical care,” says Paul.

“The death rate among children is less than the seasonal flu,” Paul points out. “We never mandated that kids get vaccinated for the seasonal flu, [even though they get] like 49 different vaccines. Can we not leave some choice for parents and kids?”

I hope so but push back again. “What if it’s airborne Ebola? Does government ever have the right to say, ‘You must take this medicine’?”

“No,” says Paul. “Once you let government in the door to make these decisions, they make onerous decisions.”

I’m a libertarian. I want government out of my life.

But an epidemic is the rare exception where some government force may be appropriate. If a disease is vicious and contagious, and a medicine clearly reduces the spread, I want government to protect me from reckless people, like it protects me from murderers.

Not to say that America needs a vaccine mandate. There’s been far too much government force during this pandemic already.

It’s good to question the government’s rules. I’m glad Paul does that.

But when it comes to epidemics, I won’t say: never.