AOC’s Grasp on American Governance Is ‘a Farce’ 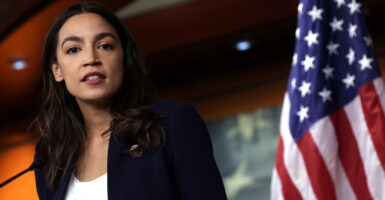 Rep. Alexandria Ocasio-Cortez, D-N.Y.—seen here at a news conference at the Capitol on Dec. 8—appears to be unaware that a senator represents more constituents than a member of the House of Representatives. (Photo: Alex Wong/Getty Images)

“The idea that Joe Manchin says that he can’t explain this back home to his people is a farce,” said Ocasio-Cortez, D-N.Y. Elsewhere, Sen. Bernie Sanders, I-Vt., similarly noted that Manchin, D-W.Va., would have to do a lot of explaining in West Virginia after abandoning Build Back Better.

The reality, as they know, is that the Democrats’ legislation is probably more unpopular in Manchin’s home state—with 74% opposing—than any other in the nation. So it’s somewhat odd to hear people who claim to be guardians of “democracy” arguing that a senator owes his loyalty to his party over his state. That is, until you quickly remember that the selective and temporary championing of crude majoritarianism by Democrats is a cynical play for power.

“I mean, it’s a farce in terms of plain democracy because I represent more or just as many or more people than Joe Manchin does—perhaps more,” Ocasio-Cortez went on.

As a factual matter, this is incorrect: West Virginia has a little under 1.8 million residents, and Ocasio-Cortez’s district a little over 700,000—but, far more importantly, it is completely irrelevant. There is no “plain democracy,” as anyone with a rudimentary understanding of basic civics already knows.

Indeed, one of the reasons the Senate exists is to stop people in dense places such as Queens from lording over people in places such as rural West Virginia. This is how we keep a diverse country intact. Whenever you point out that we’re not living in a democracy and that majoritarian rule is fundamentally un-American, illiberal and authoritarian, you get lectures about how “democracy” doesn’t mean direct democracy.

But what does it mean when historians, politicians, and left-wing leaders make statements such as, “Last time I checked, I didn’t vote for Joe Manchin for president”? Surely, they understand that the president isn’t a legislator. Surely, they comprehend that every senator is imbued with exactly the same amount of power. Or do they take the view of Sanders, who already speaks as if he’s living in a one-party state, that 51 senators are a minority if Democrats happen to make up the other 49?

“What we really need to do is crack down on the Senate,” Ocasio-Cortez said, “which acts like an old boys’ club.” (Isn’t a senator, supposedly acting alone against the wishes of his entire caucus, in a club of one?) Now, maybe progressives are just spinning their wheels in the short term, but they’re also normalizing a kind of radicalism within their ranks that threatens American governance.

Of course, in this case, even after circumventing normal and open debate by leaning on reconciliation and a simple majority, Democrats were still unable to pass Build Back Better. And it’s unlikely Manchin is alone in opposing the bill. There might well be another handful of Democrats in the Senate who would put themselves in a vulnerable position supporting a massive, debt-fueled, welfare-state expansion in the middle of a weak economic recovery and high inflation.

These politicians may not hail from states where three-quarters of the population are antagonistic to the president’s agenda, but how popular could Biden really be in Montana or New Hampshire or Arizona?

Build Back Better’s failure—should it fail in the long run (Manchin is a mercurial sort, after all)—was predicated on Biden’s ill-conceived decision to cast his lot with the hard left.

The modern Democratic Party is increasingly led by what seems like cocooned social media influencers, people who are good at ginning up progressive mobs, dunking on West Virginia senators, and complaining about the alleged inadequacies of the republic, but terrible at real-world governance.

And frankly, in the end, that’s probably a blessing for the nation.