We Shouldn’t Allow Progressives to Limit Participation in Regulatory Process 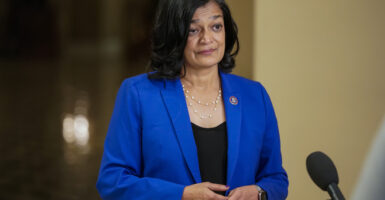 Rep. Pramila Jayapal, D-Wash., chair of the Congressional Progressive Caucus, has introduced legislation that would game the nation’s regulatory system. Under her bill, regulations primarily would be based on studies that support expanding the regulatory power of government agencies.

Among many other troubling things, Jayapal’s bill would require agencies to publicly label studies and research submitted and developed by regulated entities—including property owners, farmers, truckers, and local governments—as having a conflict of interest.

It’s not clear how one’s own research reflects any conflicts of interest. Apparently, it’s a conflict when research conflicts with the agency’s interest.

Of course, there’s no such conflict-of-interest label for research from organizations that likely would support regulations, such as environmental pressure groups and researchers who receive grants from agencies.

This conflict-of-interest label, along with other aspects of Jayapal’s legislation, would discourage those who are regulated by federal agencies from even submitting comments on proposed rules.

The process of public comment is Americans’ chance to provide feedback to government agencies so they can educate officials on the impact of their regulations. It’s a chance for regulators to hear from people who have real-world experience and an on-the-ground perspective of how the regulations will affect Americans.

If there were less public participation, agencies wouldn’t get the benefits of important analysis and perspective that could improve their regulatory decisions.

For years, conservatives have been trying to give the public a greater voice in the regulatory process. This includes transparency efforts to ensure the public can have a say on the science and data informing regulatory decisions.

The Trump administration’s Environmental Protection Agency finalized a rule that would have helped ensure that the public could access underlying science and data informing regulatory decisions. It wouldn’t have mattered who developed the studies; the rule required transparency, and the public would have been better able to evaluate how agencies make regulatory decisions.

Did the left support this effort?  Of course not.

It fought the rule, and the rule no longer exists. Instead, as seen in Jayapal’s bill, the left apparently wants agencies to be able to use whatever science they can, so long as the science supports their cause. The left is willing to limit the ability of those who oppose their objectives from providing regulatory comments and having a meaningful voice.

But chilling the voice of the people is a major aspect of the administrative state in the first place. Progressives have long pushed for technocrats to dictate the lives of Americans, as Congress sits on the sidelines having given up its legislative power.

This needs to change.

Concern over the administrative state, for good reason, is often focused on the number and scope of regulations. But this is a symptom of a much bigger problem. Through the growing administrative state, the American people have significantly lost and are further losing their voice in policies that affect their lives.

Many on the left may want to make this nation a technocracy with their “experts” running the show, as in a socialist nation.

But this is the United States, a representative system of government, and conservatives should fight for ambitious changes to bring back representative government where legislators, not bureaucrats, make the policy decisions.

Progressives want government bureaucrats, not elected representatives of the people, to make the policy decisions that affect the lives of Americans. They don’t appear to want anything or anyone, especially those who dare disagree with them, to get in the way of their extreme leftist policies and ideological objectives.

Policymakers should ensure that Congress, not bureaucrats, are the lawmakers.

Further, when agencies issue regulations, there should be clear statutory authority and transparency. And anyone—regardless of view or ideology—should have the same opportunity to have his voice heard in the rulemaking process.