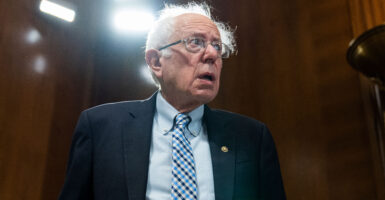 Editor’s note: On Sunday, Sen. Joe Manchin, D-W.V., told “Fox News Sunday” he would not vote for the Build Back Better bill, saying, “I cannot vote to continue with this piece of legislation. I just can’t. I’ve tried everything humanly possible. I can’t get there.”

Unable to pass their welfare-state expansion with a simple majority, Democrats have reportedly shelved the Build Back Better bill for the year.

Now, prepare for the entire left-wing infrastructure—politicians as well as the establishment press—to pivot hard from the fake “social safety net” bill to the fake “voting rights” bill, which will quickly become the most vital piece of legislation in the history of the republic.

Senate Budget Committee Chairman Bernie Sanders, I-Vt., who not long ago heralded the mere framework of Build Back Better as “by far the most significant piece of legislation ever passed in the world,” told reporters that it was now more important to get a “voting rights” bill through the Senate.

The “Jim Crow 2.0” smear—aimed at the Twittersphere, because there isn’t a single competitive race in 2022 in which “voting rights” attacks are going to make a difference—will only succeed in further corroding confidence in elections.

The demagogic lie that “democracy” is under attack in states that employ basic standards of voter integrity is an emotional appeal that does not stand up to scrutiny. It is a debate that Republicans should embrace.

Democrats can keep treating voter-ID requirements as if they were poll taxes, but most Americans support the standard that, incidentally, existed only a few years before the 2020 election anarchy.

That said, the ginned-up “voting rights” emergency is also meant to continue laying the groundwork for blowing up the legislative filibuster. Sen. Mark Warner, D-Va.—who participated in more than 300 filibusters during the Donald Trump years and who signed a letter in 2017 imploring then-Senate Majority Leader Mitch McConnell, R-Ky., to preserve the “existing rules, practices, and traditions” of the filibuster, and only a couple of months ago was criticizing former Senate Majority Leader Harry Reid, D-Nev., for attacking the procedure—came out in favor of eliminating the legislative filibuster today.

Here, too, it’s highly doubtful that moderates such as Sens. Joe Manchin, D.-W.Va., and Kyrsten Sinema, D-Ariz.—or even a number of other low-lying moderates—would help blow up a Senate norm to placate the hard left.

Manchin has been asked about “reforming” the filibuster about a bazillion times, and in each instance, to the consternation of progressives on Twitter, he’s replied with the same answer: No.

Indeed, even if shameless hypocrites such as Warner were successful in killing the filibuster, it’s unclear that Senate Democrats would be able to find the votes to pass an H.R. 1-type “voting rights” bill, which would not only override hundreds of existing laws, but compel states to count mail-in votes 10 days after Election Day to allow ballot harvesting, to allow felons to vote, to ban basic voter-ID laws, and to create councils to redraw districts (all the while undercutting free speech rights with a slew of new election regulations).

In the end, the Senate Democrats would almost surely be impelled to pass a diluted version of voting rights, which would still likely face challenges in courts by numerous states. Are red state Democrats willing to dispense with a longtime Senate norm for, if anything, fleeting partisan gain?

In addition to advocating trashing the filibuster and overriding state elections, court-packing is also back on the docket. In anticipation of Build Back Better being abandoned this year, Sen. Elizabeth Warren, D-Mass., has come out in favor of an illiberal court-packing scheme.

Of course, the chances of the Senate destroying the judiciary are still quite small. These are largely issues and debates that political types (myself included) might welcome, but they do not even register in polls that measure the priorities of American voters.

These positions simply serve to highlight the radicalism and tone-deafness of many modern Democrats, who are denied the comforts of railing about Trump every day. And the closer we get to the 2022 midterms, the bigger the lift will be to pass the reconciliation bill. The more Democrats have tried to sell it, in fact, the less popular it has gotten.

In districts that matter in 2022, it is almost certainly quite unpopular. So, instead, Democrats have decided to win the Twitter vote.