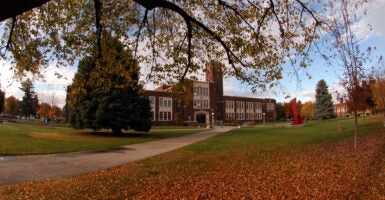 If you don’t agree with the politically correct narrative, you must be destroyed.

That’s the attitude elite Western institutions increasingly take with anyone who disagrees with the ever-moving and increasingly radical cultural left. If you have the gall to still be operating within those institutions, you are treated with an even higher level of hate.

Yenor, a tenured professor of political science, stirred up an angry hive of discontent for a speech he made at a National Conservatism conference in late October.

In the speech, he denounced the feminist ideology that treats boys and girls as if they are not only the same, but should want and value the same things as each other. He said that the modern feminist ethos of “careerism” without connection to family and religion leaves them finding meaning in politics and what he called the “global project.”

He also said that our culture now devalues and expects little out of men.

The attacks came with little actual engagement with Yenor’s view. We are simply to assume that he’s wrong and that his words and ideas are unacceptable.

This isn’t the first time Yenor has provoked a cancel mob at Boise State.

In 2017, Yenor wrote an article for The Daily Signal in which he wrote that transgender activists are undermining parental rights and traditional family values.

Yenor wrote at the time:

The reaction to Yenor’s comments then was also extreme, to say the least. Students, staff members, and outside activists sprung into action to get him fired, typically calling his words “hate speech.”

You can read his article here and decide for yourself if this constitutes hate speech.

Activists immediately launched a petition to get Yenor fired.

Boise State’s Vice President for Equity Initiatives Francisco Salinas went on a crusade against Yenor, tying his work to Nazism. As usual, it’s the diversity, equity, and inclusion administrators who act as the woke inquisitors on college campuses—reinforcing dogma and intimidating dissenters into silence.

Yenor didn’t back down. In an interview with The Daily Signal, Yenor explained that it was disappointing to see just how little the vehement denunciations addressed his arguments.

“It strikes me that there has really been, first of all, no effort to first understand what I’m arguing, and second of all, to get anywhere beyond name-calling and labeling,” Yenor said.

Instead of debate, Yenor said that the response felt like little more than a “mob.” The worst thing of all was not just that they were trying to get him fired, it was that their actions created a deep chill on speech.

The latest round of outrage at Yenor only shows how much further the cultural revolution has proceeded in our elite institutions in just a few years.

Again, there has been little real engagement with Yenor’s ideas. Instead, he’s simply been subjected to rounds of ritual denunciations based on the assumption that his opinions must be untrue and that they were meant as an attack on women.

The attacks have been vicious and personal. Yenor released audio recordings of voicemails he received after the flurry of left-wing media stories came out. The messages were hateful, called for violence, and were in some cases completely deranged.

What’s happening to Yenor is how elite institutions—academia and establishment media—treat anyone who disagrees with prescribed cultural narratives. They now ruthlessly enforce specific social views to the exclusion of everything else.

Intellectual diversity is a threat to diversity. Inclusion requires the exclusion of dissenters. Equity is only given to those deemed worthy and without wrongthink.

The socially radical and increasingly stifling atmosphere of the modern college campus is growing and spreading to all areas of our society.

Those who do not shout their devotion to the revolution are to be treated without civility or humanity.

This is the ugly course our woke institutions are taking us. Genuine debate and civil disagreement are being replaced by enforced ideology and mob retribution toward dissenters.