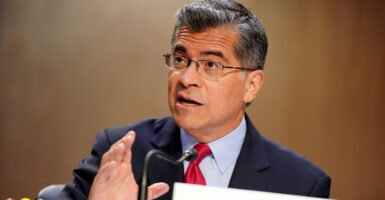 Health Secretary Xavier Becerra said “health is at the center of climate change” and that the Office of Climate Change and Health Equity would be part of the federal government’s effort to protect Americans’ health. (Photo: Greg Nash- Pool/Getty Images)

A group of House Republican leaders raised concerns Tuesday about the new climate office created by the Department of Health and Human Services.

It remains unclear what statutory authority, if any, the Department of Health and Human Services’ climate office has and if its mission is “duplicative” of other government programs, two top GOP members of the House Energy and Commerce Committee wrote in a letter to Health Secretary Xavier Becerra on Tuesday.

“President Biden continues to demand hundreds of billions of dollars for clean energy and climate provisions through the budget reconciliation process,” the two Republicans wrote to Becerra.

“We are concerned that unmoored politics—rather than congressional enactments—are leading President Biden’s agenda, which may result in inefficient and duplicative efforts across multiple divisions of the department as well as other federal agencies,” they said.

On Aug. 30, the Department of Health and Human Services announced that it would create the Office of Climate Change and Health Equity in response to President Joe Biden’s January executive order on “tackling the climate crisis.”

The agency said the office would be tasked with “identifying communities” at greater risk of climate impacts, addressing health disparities “exacerbated” by climate change and promoting the benefits of the Biden administration’s climate policies.

Following the announcement, Becerra said “health is at the center of climate change” and that the Office of Climate Change and Health Equity would be part of the federal government’s effort to protect Americans’ health.

“The new [Department of Health and Human Services’] Office of Climate Change and Health Equity is fulfilling President Biden’s vision to bring America’s world-class medical community into the fight against climate change—a fight for our health that ensures no community is left behind,” White House National Climate Adviser Gina McCarthy said in a statement.

But McMorris Rodgers and Griffith questioned whether the Office of Climate Change and Health Equity’s stated tasks have already been addressed by other federal efforts, according to their letter. They noted that the office is being funded by stripping other programs of their funds.

The Republicans requested that HHS gives their staff a briefing no later than Dec. 28 to assuage the concerns outlined in the letter.