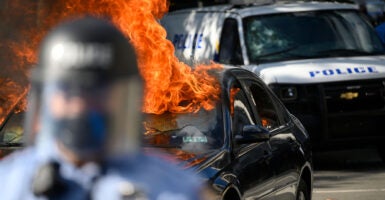 Protesters clash with police near City Hall in Philadelphia on May 30, 2020. Philadelphia has seen a record number of homicides in 2021. (Photo: Bastiaan Slabbers/NurPhoto/Getty Images)

Grim news confronts Americans in the closing days of 2021: as they prepare to gather with loved ones around the Christmas tree, their fellow citizens are being gunned down in the inner city in ever increasing numbers. And the news is likely to get worse.

That is because America’s leaders and talking heads refuse to deal directly with the ongoing effort to gut law enforcement and the entire criminal justice system. Nor are they willing to address the political violence that has led to the precipitous rise in homicides since the fateful year of 2020.

And the silence continues even though—just as news outlets were reporting record rises in murders in 12 cities—Black Lives Matter, the organization that led the political violence, released right on cue a new statement doubling down on its call for “the abolition” not just of police, but also prisons and the court system.

The statement suffered from incredibly bad timing in more than one way—it was in support of the actor Jussie Smollett, who two days later was found guilty of staging his own “attack by white supremacists,” in an effort to revive his flailing acting career. In its statement, BLM called the trial a “white supremacist charade.”

Much worse than rhetoric has been BLM’s push for the abolition of society’s law enforcement system and its support for “restorative justice,” which seeks to justify and exonerate the criminal. The push for restorative justice and already led to a pullback in prosecuting crimes.

Add to it the pullback in policing that results from BLM’s violent destabilization of cities—a documentable phenomenon colloquially known as “the Ferguson effect”—and it is little wonder that we see today’s horrific rise in murders and other crimes.

ABC News broke the story on Dec. 8 that at least 12 cities had record highs in homicide in 2021, according to police data. Philadelphia, with an astonishing 521 murders as of Dec. 6, had more than the nation’s two largest cities by population, New York and Los Angeles.

That amounted to a 13%  rise in murders in 2021, eclipsing 2020’s already record-breaking year, for the so-called City of Brotherly Love.

Other cities broke their record earlier in the year. Rochester, New York, did as early as Nov. 11, for instance.

“The community has to get fed up,” police Capt. Frank Umbrino, of the Rochester Police Department, was quoted as saying at a news conference after the city’s residents broke their 30-year-old record. “We’re extremely frustrated. It has to stop. I mean, it’s worse than a war zone around here lately.”

These murders come alongside a worrying rise in “flash mob” robberies hitting San Francisco and other urban centers in California. And it’s important to bear in mind that this year’s bloodletting builds on 2020’s 30% rise in murders nationwide, the highest in U.S. history.

All the 12 cities that saw record spikes in 2021 are run by Democratic mayors, while others have “rogue prosecutors”—elected law enforcement officials who refuse to prosecute criminals and return them back to the street, even when police do arrest them.

My colleagues Zack Smith and Cully Stimson warned about this back in June when Krasner was elected, writing, “Krasner, one of several George Soros-backed rogue prosecutors in the country, won despite his radical, pro-criminal, anti-victim approach to the job. That approach has resulted in a 40% spike in homicides, as detailed by The New York Times.”

Indeed, Krasner is receiving criticism even from fellow Democrats. Former Philadelphia Mayor Michael Nutter excoriated Krasner, writing in the Inquirer that the district attorney was an out-of-touch politician suffering from “white wokeness” and “white privilege.”

“It takes a certain audacity of ignorance and white privilege to say that right now,” wrote Nutter, who is black. “As of Monday night, 521 people, souls, spirits have been vanquished, eliminated, murdered in our City of Brotherly Love and Sisterly Affection, the most since 1960. I have to wonder what kind of messed up world of white wokeness Krasner is living in to have so little regard for human lives lost, many of them Black and brown, while he advances his own national profile as a progressive district attorney.”

The rise of rogue prosecutors such as Krasner has dovetailed with the rise of BLM, and its push for “abolition.” In their lexicon, abolition has nothing to do with ending slavery, of course. As BLM founder Patrisse Cullors explained in this Feb. 22 video, “To really put it simply, abolition is the getting rid of police, prisons and jails, surveillance, and courts.”

In the video, Cullors adds that she learned about abolition and restorative justice at the age of 21 in a workshop put together by Critical Resistance, which was founded by Communist Party leader Angela Davis.

So when BLM said in its statement this week, “In an abolitionist society, this trial would not be taking place,” they are completely correct. Under abolition, Smollett would not have been arrested, prosecuted, tried, or convicted. No criminal would be. And that’s the problem.