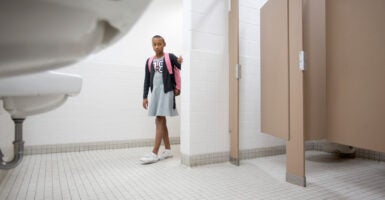 With Chicago Public Schools catering to a minuscule, but disproportionately influential, transgender lobby, boys and girls are now allowed to use whatever restroom they feel "comfortable" using in Chicago's schools. (Photo: Jonathan Kirn/Getty Images)

Students attending Chicago public schools can now use whatever restroom they want. The change is being made in an effort to be more “inclusive” and “equitable,” according to Camie Pratt, chief Title IX officer for Chicago Public Schools.

“All restrooms are open for use by anyone who feels comfortable,” Pratt said in a recent video announcing the change.

Pratt says the change is being made in an effort to comply with the U.S. Department of Education’s Title IX protections against discrimination, but there are serious concerns about how the policy will affect students.

On today’s edition of “Problematic Women,” we discuss why policies like Chicago’s new restroom rules are little more than virtue signaling, and pose a serious threat to young women.

Also on today’s show, we explain how a transgender biological male swimmer, who recently broke several female swimming records, was allowed to compete on the University of Pennsylvania women’s team. Plus, we tell you what you need to know about the Fox News’ Christmas tree in New York City, which was set on fire, and share the data on the most popular emoji of 2021.

And as always, we will be crowning our “Problematic Woman of the Week.”