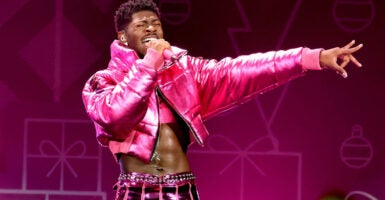 Rappers such as Lil Nas X and Future rap about pervasive immoral conduct and extravagant drug usage. Are these rappers unaware that they are promoting the normalization of lethal and harmful narcotics among innocent children? Pictured: Lil Nas X performs on Dec. 7 at the iHeartRadio 103.5 KISS FM’s Jingle Ball. (Photo: Jeff Schear / Stringer/Getty Images)

It is always humbling to learn something new. Life is, by design, a continuous journey from the unknown to the known, from the old to the new. My most recent learning experience occurred last week, when I learned of the travesties befalling our country’s youth.

We often read depressing headlines, such as “100,000 individuals died of drug overdoses last year,” but seldom pause to consider the people behind these statistics.

Over the past two decades, so-called designer drugs have infiltrated the U.S. from South America and China, harming, poisoning, and killing our country’s youth in droves. MDMA, ecstasy, fentanyl and other opioids provide a rapid escape for young people from the reality of the world around them. Tragically, for far too many, that escape becomes permanent.

Something particularly distressing that I discovered is the impact that unnecessary procedures have on children. Around 80% of knee operations performed each year are entirely unnecessary.

Apart from the long-term medical consequences of knee surgery, which often result in subsequent operations and restricted mobility for the rest of a child’s life, it also results in drug addiction.

Highly addictive medicines such as Oxycontin and Percocet are given to children as young as 13 years old. They need more of a fix as soon as they complete their doctor-prescribed dose, which leads them to cheaper and more powerful alternatives such as heroin.

That is exactly what is happening throughout the nation today, with so many people dying as a result of drug overdoses.

Even more so, sadness and anxiety have ensnared our country’s youth in a vise-like grasp. The erroneous reality of “likes” and “views” has caused young people to continuously compare themselves to morally bankrupt influencers who went to the top by happenstance.

These influencers provide a polished version of themselves but never the reality. In turn, young people yearn for their lives and looks and become depressed when they become unattainable.

Drug usage falls squarely in line with this issue as well, for their inability to achieve perfection or their desire to emulate their role models’ actions leads them down a dark path of self-destruction and, sometimes, death.

These lethal chemicals are readily acquired from other students and opportunistic drug dealers, particularly on college campuses. Worse, anxiety medications such as Xanax and “study medicines” such as Adderall are readily obtained via duplicitous university physicians.

As a result, children develop dangerous addictions to deadly substances that can lead to further drug usage and experimentation. The normalization and common acceptance of these drugs also has far-reaching effects, leading those who would otherwise not be predisposed to taking the drugs inevitably doing so out of pressure, necessity, or the expectation that the normalcy of the drug’s consumption should give them safe passage to ingesting it as well.

Our youth’s role models do not assist either. Rappers such as Lil Nas X and Future rap about pervasive immoral conduct and extravagant drug usage. To millions of shouting fans, youth anthems like Future’s “Mask Off” repeat the mantra, “Percocet, molly, Percocet.”

Are these rappers unaware that they are promoting the normalization of lethal and harmful narcotics among innocent children? On the other hand, Lil Nas X raps about having sexual relations with Satan, even posting a violent music video about it.

While they are certainly within their rights to espouse these dangerous ideals, it goes without saying that one ought not to light a cigarette in a child’s mouth.

What we are seeing in our country is nothing short of a moral decline of epic proportions. We are dying morally and physically.

Much is made of the fatal COVID-19 outbreak, and rightly so, but with all the attention that COVID-19 receives, shouldn’t we be concentrating just as much, if not more, on the soaring number of young children dying of drug overdoses in our country?

Consider why the mainstream media seems to be unconcerned with the drug overdose epidemic that is claiming our children in droves. Apart from an annual headline, they devote little effort to this subject. Their hushed tones are overwhelming; their silence is deafening; and their carelessness is deadly.

Regrettably, the Biden administration may be fostering increased drug distribution and usage in the nation through policies and activities. So many drugs enter the nation through the southern border, which President Joe Biden has largely opened for free access.

Our government’s flagrant ignorance of a critical problem affecting our population shows a clear dereliction of its duties; it has voluntarily allowed citizens of the country, those who it has sworn to protect, to die at the hands of drugs while simultaneously giving every bit of help it can to foreigners who have little legal justification for coming to our country.

Biden was chosen to safeguard our nation inside and outside. Now there is a battle being waged against our children, and we are losing miserably. It is time to act, Mr. President.