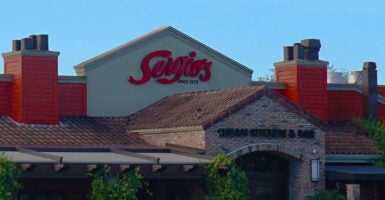 Sergio’s Restaurants is a third-generation family-owned business that has been a popular Cuban food destination in South Florida.

The company has grown to have six full-service restaurants, and has 13 more licensed outlets at sports venues, on university campuses, at airports, and in other locations, primarily in the Miami and Fort Lauderdale areas.

But the company, now with about 400 employees, is having a tough time with staffing.

Staffing problems for Sergio’s and other restaurants would only get worse under the Biden administration’s COVID-19 vaccine mandate, says restaurant CEO Carlos Gazitua.

“In our business, it is hard enough as it is to serve good hospitality and great food, and that in itself is so difficult, now more than ever, I can tell you,” Gazitua tells The Daily Signal.

Sergio’s and five other companies are being represented by the Job Creators Network, a small-business advocacy group, in the 8th U.S. Circuit Court of Appeals in a lawsuit against the mandate.

“There are people in our restaurant that haven’t been vaccinated, even though it’s a small minority, a very small amount, probably 10%, haven’t done the full vaccine, maybe 15%,” Gazitua says. “But even losing those people would jeopardize how we stay open. Because if you lose a couple of servers or a couple of dishwashers or cooks, who’s going to do that job?”

Losing employees and surging inflation are a one-two punch for restaurants, and the federal government doesn’t seem to understand that, he says.

“What they didn’t realize was how fast prices were going up, and unlike Walmart that can change [its price tags] every day, at the grocery store, unfortunately, restaurants print our menus, and we don’t have that opportunity to combat the inflation,” Gazitua says.

Numerous other litigants also have sued across other federal courts to stop the mandate from taking effect.

After the 5th U.S. Circuit Court of Appeals put a stay on the mandate, the federal Occupational Safety and Health Administration in November suspended enforcement of the emergency temporary standard for private employers while the case is pending.

The Biden administration contends the mandate is necessary because of the number of Americans that refuse to get the vaccine, and that OSHA has the statutory authority to impose it. President Joe Biden said when announcing the mandate, “We’re going to protect vaccinated workers from unvaccinated co-workers.”

Under the mandate, companies with 100 or more employees were told they had until Jan. 4 to comply with the vaccine rule. Employees who don’t get the vaccine can opt instead for weekly testing. The mandate, covering 84.2 million Americans working for about 164,000 different businesses and other entities, could pose a significant enforcement challenge and might have to rely for enforcement on employees snitching on bosses and colleagues.

“I always tell people who are unvaccinated to have an open mind to get vaccinated, to talk to your friends and doctors, because those are the people that are probably going to influence them the most, because they’re the ones that they trust the most,” Gazitua continued.

He added that the federal government seems to be pushing people to work virtually, which is harmful to industries such as the restaurant business, for which that’s not an option.

“Big government needs to have an open heart on why some Americans have decided not to get vaccinated, and I understand that balance is what I think needs to be struck here,” he said.

For a time, people began returning to restaurants, but he said “the honeymoon is over” and customers are growing frustrated by lack of staff.

“A lot of customers are actually starting to go to takeout now, you know,” he says. “A recent study just showed that people are going to takeout, because they’re frustrated with the lack of employees restaurants have.”