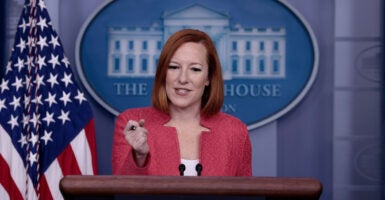 White House press secretary Jen Psaki pushed back on allegations President Joe Biden was being hypocritical in issuing travel restrictions on South Africa and other neighboring nations after criticizing the ones former President Donald Trump placed on China.

As a candidate for president, Biden referred to Trump’s “hysterical xenophobia” while on stage in Iowa, the same day the administration issued the travel ban on China in response to COVID-19.

“You know we have right now a crisis with the coronavirus, emanating from China,” Biden said to supporters on January 31, 2020. “In moments like this, this is where the credibility of a president is most needed, as he explains what we should and should not do. This is no time for Donald Trump’s record of hysterical xenophobia and fearmongering to lead the way instead of science.”

When asked about Biden’s previous remarks, Psaki said his critique was not about travel restrictions, but instead toward a “xenophobic tweet” sent out by Trump and “what he called the coronavirus and who he directed it at,” seemingly referencing the former president labeling COVID-19 the “Chinese virus.” Trump also referred to it as the “Wuhan” virus and the “kung-flu,” The Washington Post reported.

“What the president was critical of was the way that the former president put out, I believe, a xenophobic tweet, and what he called the coronavirus and who he directed it at.” pic.twitter.com/O86c8GuaEg

“The president has not been critical of travel restrictions, we have put those in place ourselves,” Psaki added. “He believes we should follow the advice of health and medical experts. That’s exactly what he did in putting in place these restrictions over the weekend.”

Biden’s comments, however, came before Trump first started using the term “Chinese virus,” according to the Post. Psaki might have been referencing a different instance on March 18, 2020, where Biden responded directly to a tweet from Trump.

“I always treated the Chinese Virus very seriously, and have done a very good job from the beginning, including my very early decision to close the ‘borders’ from China—against the wishes of almost all. Many lives were saved,” Trump said in a since-removed tweet, the Post reported.

“Stop the xenophobic fear-mongering. Be honest. Take responsibility. Do your job,” Biden tweeted.

A spokesperson for the campaign acknowledged support for travel restrictions to combat COVID-19 on March 25, 2020, noting Biden’s tweet was highlighting the severity of the virus and the need for a concrete plan, the Post reported.

“The Vice President has decried Trump’s xenophobia for years, and was saying that it shouldn’t influence the U.S. approach to this outbreak. This was not in reference to coronavirus travel restrictions,” the spokesperson added. “Travel restrictions, when supported by science, advocated by public health officials, and backed by a full strategy, can be warranted.”