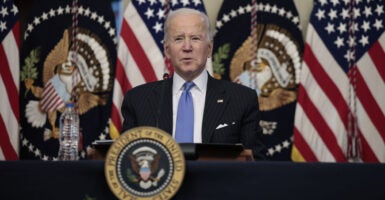 Even with the army of political propaganda outlets—or, dare I say, “journalists”—vehemently opposing former President Donald Trump and supporting Biden and his Democratic colleagues, Trump’s approval rating was still about the same at around 38%.

What does this say about the current leadership of our country? Should we simply chalk this up to a contentious, all-or-nothing political climate? Or is it something more fundamental?

When a new president takes office, many individuals and media pundits will debate for hours about their expectations for him and then criticize him based on his ability, or inability, to meet those expectations. But I have a different perspective.

I do not expect but rather hope that our president will carry out his duties in the best interests of the United States and serve as a role model for us all. That has always been my hope. Yet, with the Biden administration, I am underwhelmed and extremely disappointed with Biden’s job, like many who have voted against him and for him.

At every turn, it seems, Biden is asleep at the wheel. The man was elected to lead the most powerful nation in the world, yet more often than not, he has failed to do the simplest of things.

I will not say that Trump is the polar opposite of Biden, that in every respect that Biden has failed, Trump succeeded; no man and no president is perfect.

But at least when people laughed at Trump, he fought back, and despite what the media led you to believe, the man was feared, not for him being “unhinged,” as they said, but for his courage to fight back.

Surely, there have been many Democratic presidents who proved themselves on the world stage; I can admit that. But that is because I do not believe that the primary issue rests solely with political parties; instead, it is about doing what is right for our country.

This country is being harmed by partisan politics. We quarrel at every turn, shunning dear friends and close colleagues for holding opposing political viewpoints. It is human instinct to hold firm to one’s beliefs and to not give in when they are challenged.

Despite what the media and far-left commentators would have you believe, subscribing to one viewpoint does not subscribe you to others. A Democrat might hold a “Republican” viewpoint, and vice versa. That is completely acceptable.

Yet today, merely expressing another party’s viewpoint puts you on the opposite side of the person with whom you disagree. Of course, that is not the case, but our president may try to make you believe otherwise.

Rather than lead a nation, the president has been relegated to a position of appeasing his base. He has taken a hard stance to appease the far left.

We need a president who cares for everybody regardless of their party affiliation and who will make tough decisions in the best interests of our nation, even if it might harm him in the long run and displease those who support him. I do not believe that Biden is doing that.

I believe that both Biden and Harris are doing what is best for them, not for us. But maybe I am wrong; maybe they are just bad decision-makers. In either case, their approval ratings are telling of their failure to effectively lead our country, even with the most influential people behind their backs.

Democrats should brace themselves for midterm carnage in 2022, and they can blame it on their radical socialist agenda and Biden’s devastating and steadily declining poll numbers.

The bulk of Americans do not fall into either extreme. Most people are centrists who want politicians to work together, but this hasn’t happened thus far.

Biden campaigned as a unifier, someone who could bring the country back together, but that hasn’t happened. Things look to be exactly as polarized as they were before, if not more so in some respects.

A significant question that remains is whether Biden is entirely to blame for this. I would say that the media has played an equal part in the division of our nation. After all, how can people not be enraged when celebrities and politically influential persons broadcast disgusting and provocative anti-opposing-party rhetoric into the privacy of our homes 24 hours a day, seven days a week? One could argue, “turn off the news,” yet this rhetoric permeates nearly every form of media nowadays.

Partisanship and tribalism are going to destroy our country if we don’t get control of it. Our nation can’t survive continuing on a path of distrust, hate, and anger. Political leaders think too much for themselves and not enough about their responsibility to the people.