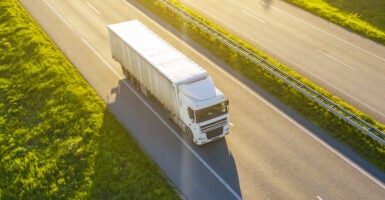 In the midst of a supply chain breakdown, the Biden administration’s vaccine mandate is likely to make matters much worse, says the CEO of a Minnesota-based trucking company.

“We’re not able to haul all of our customers’ freight as it is now,” Eric Lawrence, chief executive of Rochester-based Lawrence Transportation Co., told The Daily Signal. “Most of the trucking companies are in the same position … . We’ve got too much capacity to haul, and we need more labor so we can invest and continue to grow and add more capacity to help the supply chain. And [the vaccine mandate] is going to do the opposite of that. It’s going to take capacity away from this market.”

Lawrence Transportation, established in 1957, is among the companies nationally suing to stop the vaccine mandate. The Job Creators Network, a small-business advocacy group, is representing the Minnesota refrigerated-truckload carrier, along with five other firms in a lawsuit filed in the 8th U.S. Circuit Court of Appeals.

“I’m not anti-vax, but there’s a good number of people in the trucking industry that are just not going to get vaccinated,” Lawrence said. “I think [the mandate would] push some people into early retirement. They’re just going to leave the industry altogether.”

This whole option of testing once a week, I think, is fine, if you were in a static position with a factory. But our people are moving all over the country, and the sheer logistics of trying to get everybody tested every week is nearly impossible.

The transportation industry could lose up to 40% of its workforce, he said.

Several other litigants have sued across other federal courts to stop the mandate from going into effect.

After the 5th U.S. Circuit Court of Appeals put a stay on the mandate, the federal Occupational Safety and Health Administration this month suspended enforcement of the emergency temporary standard for private employers while the case is pending.

Companies and other entities with 100 or more employees were told they had until Jan. 4 to comply with the vaccine rule. Employees that don’t get the vaccine can opt instead for weekly testing. The mandate—covering 84.2 million Americans working for about 164,000 businesses and organizations—could pose a significant challenge and might have to rely for help in enforcement on employees snitching on bosses and colleagues.

The Biden administration contends the mandate is necessary because of the number of Americans that refuse to get the vaccine, and that OSHA has the statutory authority to impose it. President Joe Biden said when announcing the mandate, “We’re going to protect vaccinated workers from unvaccinated co-workers.”

Lawrence Transportation has 125 employees, and generally has between 20 and 50 independent contractors, the CEO said. One option for companies would be to reduce the number of employees to fewer than 100, but Lawrence said he would prefer to fight the mandate.

“I could shrink this thing to get under 100 [employees] to avoid the mandate, which is an option. But in the same breath, they’ve also come out and said that OSHA is studying companies under 100,” he said. “So, that leads me to believe that they’re going to ram this through, and then may turn around and come up with another mandate for those with 50 [employees] or less. So, they’ll just shrink us down to nothing if we take that approach. So, I think that we chose to fight.”