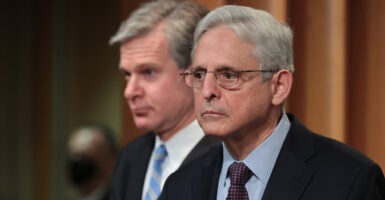 A recent lawsuit filed by the U.S. Justice Department’s Civil Rights Division against Texas may make the Biden administration’s political allies happy, but it borders on the frivolous.

The lawsuit, which challenges an election reform bill that Texas Gov. Greg Abbott signed into law in September, reveals the motives behind the left’s strident opposition to commonsense steps to protect the integrity of the voting process.

The Texas Legislature passed the Texas Election Integrity Protection Act in August, after Democratic state legislators who had fled the state (beer-in-hand on a private jet) returned.

The law made many appropriate, much-needed changes to improve Texas’ election integrity without infringing on the ability of eligible Texans to vote. It immediately was met with hysterical claims by critics, including Vice President Kamala Harris, who falsely asserted that the new law was “one of the most restrictive in the nation.”

So what made the law so restrictive? Apparently not much, according to Attorney General Merrick Garland’s Justice Department.

In what was a very extensive bill, the Justice Department could only find two provisions to target. So much for it being “one of the most restrictive” laws in the country.

Section 208 of the Voting Rights Act provides that “any voter who requires assistance to vote by reason of blindness, disability, or inability to read or write may be given assistance by a person of the voter’s choice,” as long as the assistor is not “the voter’s employer … or officer or agent of the voter’s union.”

Texas has a history of problems with paid political activists giving illegal assistance, such as Facunda Garcia and almost half a dozen individuals convicted for illegal assistance in a 2012 Democratic primary election in Cameron County, Texas. Texas makes assistors swear an oath in which they promise that they will only provide assistance and not tell a voter how to vote.

The Texas Election Integrity Protection Act amended the oath so it reads, in part, as follows:

Any member of the public would not think it is a problem since it explains very carefully that the assistor is charged with simply providing assistance in understanding what is on the ballot and helping the voter mark the ballot. The assistor is warned to not go beyond that and tell a voter how to vote or to fill out the ballot contrary to what the voter wants.

But according to the Justice Department, this language “disenfranchises” voters because it will somehow prevent assistors from “answering a voter’s questions, explaining the voting process, paraphrasing complex language, and providing other forms of voting assistance.” That makes no sense—except for the claim about “paraphrasing complex language.”

Nothing in the new oath prevents the assistor from answering questions about what is written on the ballot or explaining how to mark the ballot, or otherwise providing assistance along those lines.

The assistors simply cannot go beyond providing assistance by coercing and pressuring the voter to cast the ballot for the candidates or referenda the assistor wants chosen—and one way of doing that would be to “paraphrase” what is on the ballot rather than engaging in a straight reading of the text.

Paraphrasing gives a biased assistor the ability to slant what is on the ballot and thus influence the voter—something the Garland Justice Department apparently wants to preserve for Democratic assistors in Texas like Garcia.

In essence, this lawsuit wants to make illegal assistance easier to get away with. In any event, the claim that this oath violates Section 208 of the Voting Rights Act is meritless.

Section 101 of the Civil Rights Act provides that voters cannot be denied the ability to vote because of an error or omission “on any record or paper” that is not relevant to the voter’s qualification to vote. The lawsuit claims that the Texas Election Integrity Protection Act’s extension of the state’s voter ID requirement from in-person voting to absentee ballots violates this provision.

Keep in mind that the Texas voter ID law for in-person voting was approved by the courts, overcoming a challenge filed by the Obama administration’s Justice Department, and has been in place for years with no problems.

The Texas Election Integrity Protection Act amended the law to require individuals to include the serial number of either their Texas driver’s license or the free photo ID the state issues to anyone who doesn’t already have an ID on both their application for an absentee ballot and on the absentee ballot envelope itself when they send the completed ballot back to election officials.

However, voters are actually given the ability to “cure” a defect, so if they forget to include their ID number or there is some other problem, election officials are obligated to contact the voter so the voter can fix the problem.

The Justice Department claims that this requirement violates the Civil Rights Act. Why? Because supposedly “requiring rejection of mail ballot materials that do not contain identification numbers that identify the same voter identified” in the state’s voter registration records is rejecting a ballot for “errors or omissions that are not material to determining” whether a voter is eligible to vote.

No, really, that is what the Justice Department is arguing: that a basic security provision that ensures it is really the registered voter who requested and voted the absentee ballot is invalid because it violates federal law to actually verify the voter’s identity.

This is an absurd claim on its face and one that again reveals the disturbing motivations that drive the opponents of election reform—they want to make it easy to cheat using absentee ballots.

The lawsuit is filed under the aegis of Assistant Attorney General for Civil Rights Kristen Clarke and her principal deputy, Pam Karlan, both of whom have a long history of opposing all election reform efforts.

If you want another example of just how partisan the lawyers are behind this lawsuit, the complaint is also signed by Dan Freeman, a lawyer in the voting section of the Civil Rights Division, who bragged on his Facebook page in 2013 that he started the crowd booing at Paul Ryan at the second inauguration of President Barack Obama.