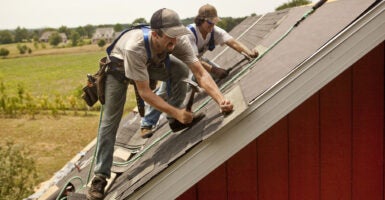 “I'm aware that they could put us out of business,” Illinois business owner Gary Rabine says of opposing President Biden's vaccine mandate. “But being canceled is nothing compared to what will happen if we continually let big government take our freedoms away.” (Photo illustration: Andy Sacks/Getty Images)

Despite the threat of getting “canceled” for speaking out, business owners across the country are publicly resisting the Biden administration’s vaccine mandate for private employers.

“I’m aware that they could put us out of business,” Gary Rabine, founder of The Rabine Group in Illinois, told The Daily Signal. “But being canceled is nothing compared to what will happen if we continually let big government take our freedoms away.”

The Rabine Group employs more than 300 workers in Illinois who do what its founder describes as “mostly all dirty jobs”—repairing roofs, parking lots, doors, commercial docks, and HVAC systems, as well as removing snow.

Because of this, Rabine’s employees often work outside or in spaced-out environments, where the risks of contracting and spreading COVID-19 are minimal.

“Why that’s not being considered either is kind of beyond me,” Rabine said of President Joe Biden’s blanket mandate that businesses and other organizations employing 100 or more make sure their employees are fully vaccinated.

James Crocker, founder and owner of Hog Technologies, a water-blasting technology company in Stuart, Florida, is in a similar boat.

Hog Technologies grew from a $1,200 pressure washer that Crocker purchased when he was 18 to the world’s leading supplier of rubber removal and marking systems for roads and runways. Thirty-two years after its start, Crocker employs nearly 200 employees, many of whom also work in the field or outdoors.

Beyond the low-risk nature of their work, which renders many employees’ vaccine status irrelevant to the safety of others, Crocker told The Daily Signal that enforcing the Biden administration’s vaccine mandate would result in many of his employees’ turning in their resignation “immediately.”

“They’ve already told me so,” he said.

From this perspective, Crocker said, publicly fighting the mandate is both necessary and right.

“Our liberties are under attack, and much like the muscles in our bodies, if we don’t exercise our liberties, we will lose them,” he said.

What Vaccine Mandate for Employers Does

On Sept. 9, Biden announced sweeping vaccine mandates that would apply to federal workers and contractors, health care staff, and employers with 100 or more employees.

“We’ve been patient, but our patience is wearing thin, and your refusal has cost all of us,” Biden said during White House remarks, in a sharp rebuke aimed at those not yet vaccinated.

Biden asked the Labor Department’s Occupational Safety and Health Administration to craft an emergency rule requiring businesses and other organizations with 100 or more employees to ensure that their workers either get a COVID-19 vaccine shot or submit weekly testing results.

This OSHA rule could apply to as many as 100 million Americans.

Since September, however, Biden’s mandate for private employers has faced a series of legal setbacks. At least 26 states have taken action in court, arguing for the rule to be blocked.

Most recently, the U.S. Court of Appeals for the 5th Circuit affirmed its previous decision to temporarily block the mandate. The appeals court contended that the rule raises “grave statutory and constitutional issues” and noted that:

a 28-year-old trucker who spends his work day alone is less at risk from coronavirus than a 62-year-old prison janitor. The mandate fails to consider the nuances of different workplaces and workers’ different exposure risks.

In light of the 5th Circuit’s ruling, OSHA announced Wednesday that it has suspended implementation and enforcement of the vaccine mandate, “pending future developments in the litigation.” In a press release, the agency said that it “remains confident in its authority to protect workers in emergencies.”

Crocker and Rabine are both parties to a lawsuit challenging the vaccine mandate that was filed Nov. 4 by Job Creators Network, which calls itself the nation’s leading small-business advocacy organization.

The lawsuit seeks to block OSHA’s emergency rule that would force employers such as Crocker and Rabine to carry out a vaccine mandate for their employees or require them to get a weekly test, arguing that the federal government doesn’t have the power to require that of businesses.

Under the rule, businesses that don’t comply may be fined up to $14,000 per violation. Rabine said the accumulation of repeated $14,000 fines could easily destroy his business, but the alternative is even worse.

“I would never, ever fire one of my teammates,” he said, adding:

These people are like family to me. I never would fire one of them for doing something against their religious freedom or their health freedom. So we will lose our businesses through fines by the federal government if we let this happen, and we won’t be the only business that’ll be crushed. But more importantly, families are going to be crushed, hardworking families are going to lose their jobs, lose their livelihood—this is so un-American.

Crocker said that if he has to enforce the Biden administration’s vaccine mandate—a task he also has no interest in doing—he, too, risks losing his business. Even if the mandate affects only a few employees, the effects could be devastating, Crocker said.

“What would that cost me, to replace my VP of marketing?” Crocker asked. “Hundreds of thousands of dollars. To build within a new person all of the awareness of our competitive advantages, to educate them sufficiently, where they can intelligently make decisions about how to market our products around the globe—it’s daunting.”

To understand the threat the vaccine mandate poses, Crocker asked the Biden administration “to put this mandate in the context of all of the other crises facing our small businesses.”

“I’m here to tell you that the facts [show] our small businesses are at or near the point of breaking,” he said, adding:

All of us are facing traumatic price increases in the goods we use to complete our products or services. All of us are facing incredible supply chain shortages. And this mandate represents a completely unnecessary and significant burden that small businesses should not be asked to bear or expected to bear.

Neither Crocker nor Rabine describes himself as “anti-vaccine.”

Instead of a one-size-fits-all government mandate that does little to keep workplaces safe, Rabine said, he is exploring a more creative solution: a free and optional testing program for all of his employees.

“My goal is to make testing really easy in my offices, so anybody that’s worried about it that’s been vaxxed or not can get tested on a weekly basis,” he said.

This solution, Rabine said, promises to be easier, more effective, and less invasive than a vaccine mandate that many workers oppose.

“There’s something wrong with a mandate in a great country like America,” he said. “We all should be questioning it.”

“This is just a gross misappropriation of priority on the part of our current administration,” Crocker added. “The number of challenges facing our small business—this mandate has no place.”