Rx for Disaster: Democrats’ Bill Shows How Not to Get Affordable, Innovative Prescription Drugs 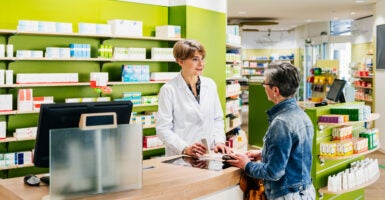 Rather than layering on more counterproductive government regulation, Congress should address government policies driving up prescription drug costs and making it harder to get drugs to market effectively.  (Photo: Tom Werner/Digital Vision/Getty Images)

Congressional Democrats have released their latest version of a drug-pricing proposal that would expand government’s role by setting prices for prescription drugs for the first time.

Specifically, in HR 5376, the government would set prices in Medicare for a limited number of drugs that account for substantial spending in Medicare.

Such policies go in the wrong direction. They would hurt access to drugs and innovation, undermine the ability of private plans to negotiate further price discounts for enrollees, and discourage future generic drugs—which often cost less—from coming to market.

In addition, the bill’s approach would overturn a decadeslong bipartisan consensus that the government should create a climate for innovation and lower costs in prescription drugs—without setting prices.

Relative to earlier versions of this proposal, the scope of the current bill has been narrowed to apply to fewer drugs. That’s only a cosmetic change, however, as this version would put in place a statutory and administrative structure that could easily be expanded in the future.

The bill’s language refers to those controls as “negotiations” between the government and drugmakers. But one of the bill’s provisions reveals just how purely cosmetic an exercise that is.

In 56 pages of legislative text laying out the what, when, and how of determining the maximum price for certain drugs, the words “negotiation” or “renegotiation” appear 72 times.

Yet the whole game is given away by a section specifying that the secretary of the Department of Health and Human Services is not allowed to agree to a “negotiated” price that is higher than the (separately determined) “ceiling” price.

With Congress having spelled out in the bill how to calculate the maximum (ceiling) price that the government will pay, a drugmaker has no reason or incentive to agree to a price that is anything other than just slightly below that ceiling price.

That one section effectively turns the rest of those provisions into little more than the script for a stylized process of formalizing results that are both predictable and predetermined.

The legislation also specifies that once an “agreement” is in place for a drug, all private Medicare Part D and Medicare Advantage plans must cover the drug. That means the manufacturer will have no incentive to offer those plans a price that is lower than the ceiling price, while plans will be stripped of the biggest leverage (namely, excluding a drug from their formularies) that they currently have for extracting discounts from drugmakers.

The net effect of these provisions essentially boils down to this: The “ceiling” price becomes the “negotiated” price, and it also becomes the “floor” price.

As noted above, these provisions also will discourage future generic drugs from coming to market. That’s because the bill stipulates that the ceiling price is reduced the longer a price-controlled drug has no generic competition.

Perversely, that will discourage potential generic competitors from entering the market. The price-control provisions will have already narrowed the price difference between the original product and the generic, reducing the financial incentive for patients and health plans to switch to the generic.

So, the “price” for these drug price controls will end up being less discounting in Medicare drug plans and fewer low-priced generic competitors.

A fundamentally different approach is needed.

Rather than layering on more counterproductive government regulation, Congress should address government policies driving up prescription drug costs and making it harder to get drugs to market effectively.

But first Congress needs to reject the flawed bill now before it.