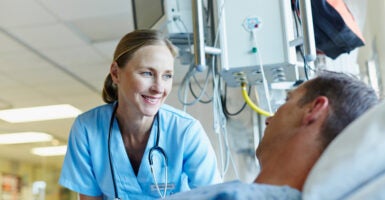 The most cutting-edge drugs for serious and life-threatening conditions also tend to be the most expensive, which means they are the ones most likely to be dropped from coverage as a result of government negotiations. So, those who rely on the newest, best-in-class medicines would find themselves suddenly cut off from treatment. (Photo: Morsa Images/Digital Vision/Getty Images) 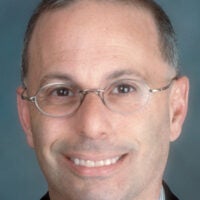 Peter Pitts, a former Food and Drug Administration associate commissioner, is president of the Center for Medicine in the Public Interest.

As chairman of the Senate Finance Committee, Sen. Ron Wyden wants to see his ideas on how to reduce drug prices become law in the multitrillion-dollar spending bill that Congress will soon consider.

The first item on the Oregon Democrat’s list is to allow Medicare to directly negotiate prices with drug manufacturers.

Wyden also wants those lower prices to be made widely available—not just to Medicare beneficiaries, but to those with private and employer-sponsored insurance, too.

Here’s the problem: Those two principles would effectively impose government price controls on all medicines sold in the United States.

That may offer superficial appeal, but price controls inevitably equal choice controls—just as they do in Europe and Canada. That would reduce access to lifesaving medicine today and stifle the development of tomorrow’s new treatments and cures.

A recent analysis from the Congressional Budget Office found that negotiations between Medicare and drug manufacturers would lower prices only if Medicare came to the table with considerable leverage. The most likely way to exert pressure? A national formulary that excludes new drugs.

That makes sense. When two parties bargain, both sides must be willing to “walk away” from the negotiating table. As President John F. Kennedy said of the Soviet Union, “We cannot negotiate with people who say what’s mine is mine, and what’s yours is negotiable.”

That possibility should frighten patients. If the government walks away from the negotiating table (or if drugmakers did, for that matter), millions of patients would lose access to the cutting-edge medicines they need.

Indeed, we could all soon find ourselves in a situation where bureaucrats and corporate lawyers—rather than doctors—decide which drugs patients can have.

That would have a deleterious effect on everyone’s health.

If restrictive formularies become the norm as they are in Europe and Canada, our Uncle Sam, M.D., will need some sort of metric to decide who can have what drugs.

Likely, they would turn to a system commonly used in nationalized health care systems, in which drugs are rated as cost-effective—or not—based on whether they can deliver a year of “perfect” health.

That metric is known as a “quality-adjusted life year.” But quality-adjusted life year systems discriminate against people with chronic diseases and disabilities. Because those patients can never achieve so-called perfect health, drugs that may do wonders for them, helping them live longer or enhancing quality of life, are deemed less cost-effective than drugs to treat people who are otherwise healthy.

And it’s not just those with chronic diseases and disabilities who would suffer.

The most cutting-edge drugs for serious and life-threatening conditions also tend to be the most expensive, which means they are the ones most likely to be dropped from coverage as a result of government negotiations.

So, those who rely on the newest, best-in-class medicines—like Aduhelm to treat Alzheimer’s disease or Rylaze to treat leukemia—would find themselves suddenly cut off from treatment.

We don’t have to go down this path.

Instead of pursuing legislation that will replace your doctor with a nameless Beltway bureaucrat, lawmakers could—and, indeed, must—pass measures that directly help patients.

One method would be relatively simple: Cap out-of-pocket costs for patients. According to research by the Kaiser Family Foundation, nearly 30% of all adults have skipped prescription drugs due to the expense.

A strict limit on what individuals have to pay could have an immediate impact on their health. It’s not about negotiating a “list price” that nobody pays, but about having people spend less when they fill their prescriptions. Much less.

Lower out-of-pocket costs start with transparency about the role of pharmacy benefit managers. These companies negotiate drug rebates on behalf of insurers and largely determine which medicines are included on insurance formularies.

But consumers don’t directly benefit from these discounts. In fact, a 2020 study from the University of Southern California found that bigger pharmacy benefit managers’ rebates correlate with higher drug list prices. Consumers deserve to know how much those industry middlemen are pocketing, and whether they’re actually helping patients.

Too many Americans struggle to afford their medicine. But policies that cut off access to medicine are not the answer. Solutions for lower-cost medicines with broader access begin with putting patients—rather than politics—first.