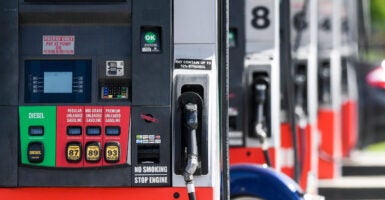 “We certainly hope not,” Granholm said when asked if the price at the pump would surpass that threshold, during a CNN interview Sunday.

Granholm then blamed the Organization of the Petroleum Exporting Countries and U.S. firms for not producing enough oil, which she said is driving up the price of gasoline. The energy secretary, President Joe Biden, and several other administration officials have repeatedly called upon the Middle Eastern cartel to boost production amid supply chain snarls.

However, Biden has implemented aggressive climate policies that have directly targeted the fossil fuel industry and curbed U.S. energy independence, according to critics. Industry groups have urged the administration to remove regulatory barriers that disincentivize domestic energy production and increase American reliance on foreign powers.

Last week, Granholm was criticized after she laughed about rising gas prices.

“Millionaire Energy Secretary Granholm laughs as she acknowledges that the Biden regime has put OPEC back in charge of global oil production and soaring prices that are harming non-millionaire Americans. Under President [Donald] Trump, American frackers were large and in charge of both, and prices were low,” Steve Milloy, a former member of the Trump transition team, previously said in a statement.

Later in the interview, Granholm warned that Americans should prepare for higher heating costs during the winter. The Energy Information Administration forecasted that heating costs would surge as much as 54% for Americans in the coming months.

The average price of gasoline increased to $3.42 per gallon on Monday, remaining at its highest level since 2014, according to a AAA database. The last time gas reached $4 per gallon was in July 2008, Energy Information Administration data showed.