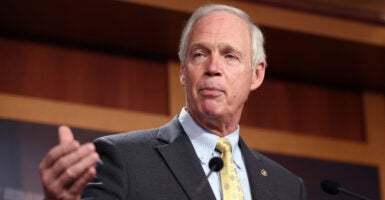 "I think we have to understand what Albert Einstein was reported to have said: The definition of insanity is doing the same thing over and over again and expecting different results,” Sen. Ron Johnson, R-Wis., says of government response to COVID-19 in remarks Thursday at The Heritage Foundation. Pictured: Johnson speaks during an Aug. 4 press conference with fellow Republican senators at the Capitol. (Photo: Kevin Dietsch/Getty Images)

“Have all these policy responses worked? The shutdowns? The mandates?” Johnson asked rhetorically during remarks Thursday at The Heritage Foundation.

The Wisconsin Republican said that after 750,000 deaths in the United States related to COVID-19, trillions of dollars in additional debt, psychological harm to young children from lengthy school closures, and the loss of freedom, government’s response to the disease “has been a miserable failure.”

“And at some point in time I think we have to understand what Albert Einstein was reported to have said. The definition of insanity is doing the same thing over and over again and expecting different results,” Johnson said.

“And here we are proposing another policy prescription, mandates that will be unbelievably destructive to our economy, destructive to our health care sector, to our military readiness, to trucking, to transportation, and we are just barreling ahead,” he told his audience at Heritage, which is the parent organization of The Daily Signal.

The Biden administration’s largest vaccine mandate—which follows mandates for federal employees and contractors—is being imposed through the Occupational Safety and Health Administration, or OSHA, on all employers with at least 100 employees.

Multiple lawsuits were announced Thursday to challenge the constitutionality of the mandate for private employers—including from the state of Arizona; the Job Creators Network, an advocacy group for small businesses; and The Daily Wire, an online news outlet.

The emergency rule from OSHA, which is part of the Labor Department, has not fared well in past court cases. Others have announced likely litigation to stop the mandate from going forward.

In his speech at Heritage, Johnson clarified that he personally didn’t get a COVID-19 vaccination because he has natural immunity, but stressed that he is not opposed to vaccines.

The senator said he was a big supporter of Operation Warp Speed, the public-private partnership launched in 2020 by President Donald Trump that waived certain regulations to expedite production of a COVID-19 vaccine. It eventually led to three federally approved vaccines for adults.

Vaccines should be a personal choice, Johnson said, stressing that negative side effects of the vaccines shouldn’t be ignored.

He said that more than 800,000 adverse reactions have been reported as a result of COVID-19 vaccines.

Many doctors and nurses aren’t complying with workplace mandates that preceded the Biden administration’s federal order, he added.

“Many nurses, many doctors who are the heroes of COVID—they had the courage and compassion to treat COVID patients—many caught COVID, some died, most survived,” Johnson said. “Now they’re seeing and treating COVID injuries. I can tell you they will not get the vaccine. We will lose decades, decades of experience. I heard of one hospital [that] no longer has full-time nursing staff. They’re using traveling nurses.”

The Biden administration contends that the emergency rule from the Occupational Safety and Health Administration will protect about 80 million American workers from grave danger.

“COVID-19 continues to hold back our workforce and our economy, and it will continue to do so until more Americans are vaccinated,” Labor Secretary Marty Walsh and White House COVID-19 Response Coordinator Jeff Zients wrote in a USA Today op-ed, adding:

American workers deserve and expect a safe and healthy workplace. This rule covers more than 80 million workers and will have a huge impact, saving thousands of lives and preventing 250,000 workers from hospitalization over the next six months alone.

Another unfortunate possibility is that some Americans who otherwise would get vaccinated might become “hard-nosed” and opt not to get a federally mandated vaccine, Dr. Martin Makary, a surgeon who is a professor at the Johns Hopkins University School of Medicine and editor of Medpage Today, said at the Heritage Foundation event.

“Is it a politician doing a television advertisement or a local physician making the case” to his patients who will convince more Americans to get vaccinated, Makary asked.

“The power of testimonials, local medical officials in the context of that relationship, is, I think, the most powerful vehicle to get those at risk immune,” he said.

Makary also said he is concerned about the punitive push to force COVID-19 vaccines on Americans.

“For the first time, we’ve crossed that line to say this is a punishment. And that’s why people have said, and these are high-level people in the Biden administration or immediate former advisers that have said, we need to test people twice a day at their own expense,” Makary said.

“So what we’re seeing here is basically a form of class warfare from being out of touch with everyday people,” he said, later adding:

Half of Americans live paycheck to paycheck, and when they’re put out of their work because the antibodies in their blood system are not authorized by Dr. [Anthony] Fauci as the right type of COVID antibodies, that’s an American tragedy.

Rich people have done very well in this pandemic. Most are remodeling their homes, and they’re not making them smaller. You can’t even find clips and nails and wood and ceramic tiles. This has been a very good time for wealthy people in America, but the other half of America has had a very different experience.

As of August, 10.4 million jobs went unfilled, 1.5 million of them in sectors such as health care and social services, Doug Badger, a senior fellow for domestic policy studies at Heritage, said.

“Now, obviously, the causes of these labor shortages are many, but vaccine mandates can only move in the wrong direction,” Badger said.

He added: “When the labor supply is tight, government policy should encourage people to return to work and these job-or-jab ultimatums, I think, can only move the economy in a much worse direction.”