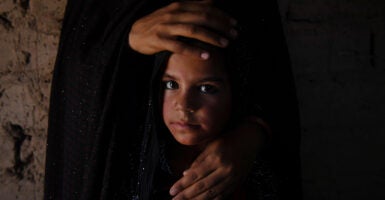 Six-year-old Farzana sits with her mother, Zarmina, in a shelter in a camp for internally displaced people in Herat province, Afghanistan, on June 17, 2019. Farzana’s father, Abdul Nabi, sold her for the equivalent of $61 to pay off a debt and to feed his family. The purchaser intended to give Farzana to his 13-year-old son as his child bride. After repeated appeals from Farzana’s mother, tribal chiefs intervened and raised enough money to buy Farzana back and stop the marriage. (Photo: Kate Geraghty/ Fairfax Media/Getty Images)

Congressional leaders have moved onto the president’s so-called Build Back Better agenda, where they duke it out over how many billions of taxpayer dollars to spend on “tree equity.” (Is $2.5 billion enough?) Biden jetted off to a climate conference that was so important, he napped through it. And Americans are consumed with inflation, a supply chain crisis, and ridiculously high gas prices.

Meanwhile, in Afghanistan, where the president chaotically withdrew U.S. troops this summer, 9-year-old Afghan girls are being bought and sold as child brides.

This week, CNN’s “The Lead with Jake Tapper” aired a horrific report from Afghanistan involving fathers so desperate, they have “no choice” but to sell their young daughters into marriage. One of the girls, 9-year-old Parwana, is seen on-camera applying mascara and lipstick as a reporter shares her dreams of going to school and becoming a teacher.

A few moments later, Parwana is seen being sold to a man who claims he’s 55 years old—although he looks much older—for the equivalent of $2,200.

“My father has sold me because we don’t have bread, rice, and flour,” Parwana told CNN. “He has sold me to an old man.”

The most heartbreaking scene captures Parwana holding onto her mother as she’s dragged away by her new “husband.” Few other images could evoke such sadness and horror.

CNN reported “child marriage is nothing new” in that part of Afghanistan, but experts say cases are increasing as the country is now engulfed in an economic and humanitarian crisis.

With aid agencies forced to leave, the international community is caught between a rock and a hard place: How do they deliver help to families in a country controlled by the Taliban, a radical terrorist organization?

Considering that the U.S. State Department hasn’t yet figured out how to evacuate the estimated 200-plus U.S. citizens who still remain trapped behind enemy lines, figuring out how to deliver aid doesn’t appear to be a top priority of the Biden administration.

Instead, the administration remains laser-focused on other priorities: a climate crisis that could affect the world decades from now, investigating parents who speak up at school board meetings as potential “domestic terrorist” threats, and remaking the American welfare state. Sure, a president can walk and chew gum at the same time, but in the case of Afghanistan, Biden isn’t.

Of course, addressing the scale of the catastrophe would require Biden to admit that his Afghanistan withdrawal wasn’t well thought out—or at least acknowledge that it would entail some horrific consequences. The rushed withdrawal emboldened the Taliban at the expense of American and Afghan lives.

In addition to fathers selling their young daughters to feed their families, Afghan girls and women lost their most basic rights. Many can no longer go to work, attend school, or even safely leave their homes.

America can’t be the world’s police, solving every humanitarian crisis that comes our way. But after the U.S. partnered with the country for 20 years, Biden owes Afghanistan—specifically, its girls and women—more. For all its talk of “gender equity and equality” and the importance of advocating for “the rights of women and girls,” it’s especially shameful that the Biden administration hasn’t issued a peep—much less offered a solution—to the crisis it helped create.

Indeed, the Biden administration’s silence has been so appalling that Sens. Joni Ernst, R-Iowa, and Dianne Feinstein, D-Calif., wrote a letter to the president this week demanding information about its “plan” in support of Afghan women’s and girls’ rights. Signed by every female U.S. senator, they write, “American disengagement from Afghanistan puts at risk hard-won gains for Afghan women and girls,” adding:

You have committed to press the Taliban to uphold the rights of women and girls, and you have stated that America will maintain an enduring partnership with the people of Afghanistan resisting Taliban rule. … We request and look forward to a briefing from the administration on your plan.

Unless and until the Biden administration gets serious about addressing the humanitarian crisis it left in its wake, every Afghan girl who gets dragged away by an older man will serve as a stain on this White House and the values it claims to represent.

Calling it a “child-marriage crisis” is a sanitized way of phrasing what’s happening to Afghan girls, some as young as 4 years old. But in softening the truth, we do its victims no favors. As a consequence of Biden’s feckless withdrawal, Afghan girls are being sold as sex slaves.

Appallingly, along with our nation’s first female vice president, Biden has done nothing but leave the crisis to get worse.