Media ‘Got It Wrong’ on US Withdrawal From Afghanistan, Pompeo Says 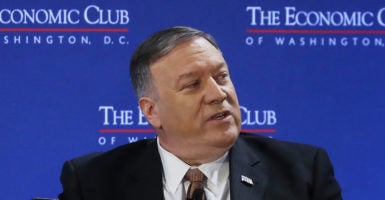 "There’s no deadline for this,” Secretary of State Mike Pompeo tells reporters traveling with him Tuesday, speaking of a U.S. withdrawal from Afghanistan. Pictured: Pompeo talks about U.S. diplomatic relations and trade agreements Monday at an event held by The Economic Club of Washington, D.C. (Photo: Mark Wilson/Getty Images)

BANGKOK—Secretary of State Mike Pompeo pushed back on what he called inaccurate news reports regarding U.S. plans to withdraw its military forces from Afghanistan by 2020.

“I wish reporters had been a little more careful in what they had said. They got it wrong,” Pompeo told reporters Tuesday en route to the Indo-Pacific region for a weeklong series of meetings in Thailand, Australia, and the Federated States of Micronesia.

“There’s no deadline for this,” he said of withdrawing from Afghanistan.

In remarks Monday at The Economic Club of Washington, D.C., Pompeo reportedly announced President Donald Trump’s intention to pull all U.S. troops out of Afghanistan by next year—in time for America’s presidential election.

Many U.S. media outlets painted Pompeo’s remarks as a tacit declaration that the 2020 election was driving the withdrawal timeline.

On Tuesday, however, Pompeo challenged that characterization, as well as the notion that the U.S. was looking for an exit from Afghanistan by any means necessary.

“The president has been very direct about his expectations that we will reduce our operational footprint on the ground in Afghanistan just as quickly as we can get there,” Pompeo told reporters traveling with him.

The secretary of state added that such an effort had to be paired with “an adequate risk-reduction plan” to make sure Afghanistan does not become, once again, a safe harbor for terrorists with designs on global attacks.

“We will have an orderly plan for how we’re going to maintain our counterterrorism posture in the region,” Pompeo said.

Despite promises to draw down in Afghanistan, the number of U.S. troops in-country has gone up on Trump’s watch.

Taliban and Islamic State fighters are ratcheting up their attacks on Afghan forces and civilians, officials say, and the instability has spurred U.S. military leaders to request more troops.

Underscoring the fragile security situation in Afghanistan, a roadside bomb Wednesday killed 35 people traveling on a bus and injured dozens more, according to news reports.

More civilians died in Afghanistan due to fighting in 2018 than in the previous nine years, a United Nations report found. Yet, despite the increase in violence, a negotiated end to the war could now be closer than ever.

Since last year, Zalmay Khalilzad, the U.S. special envoy for peace in Afghanistan, has met several times with Taliban officials, hammering out the prospective terms of a cease-fire deal—and a plan for the eventual cessation of hostilities.

After months of stop-and-go progress, U.S.-Taliban talks are seen as inching toward a breakthrough. A memorandum of understanding between the U.S. and the Taliban calling for an end to hostilities reportedly is possible within days.

With the Taliban removed from power and the Afghan government establishing its legitimacy, the U.S. has, in a way, already accomplished its war goals in Afghanistan, said Jeff Smith, a research fellow in The Heritage Foundation’s Asian Studies Center.

Along that line of thinking, the tenuous status quo between Kabul and the Taliban might be the best outcome America could have hoped for, Smith said.

A lean, long-term advise and assist mission in Afghanistan would be a cost-effective investment for the U.S. to maintain its gains and mitigate “any threats to U.S. interests and territory from regional terrorist groups,” he said.

“There’s no reason to believe America’s footprint in Afghanistan can’t evolve into a high-level train and assist mission, the likes of which the U.S. is operating in dozens of countries around the globe,” Smith said.

America and allies invaded Afghanistan on Oct. 7, 2001, weeks after the 9/11 terrorist attacks. The U.S. officially ended its combat mission in Afghanistan in 2014, shifting to a so-called advise and assist operation that left Afghans to bear the brunt of fighting against militants.

About 14,000 U.S. troops currently are deployed to Afghanistan, providing air support and other types of assistance to Afghan forces. Those U.S. forces are part of  NATO’s Resolute Support mission, which comprises about 20,000 foreign soldiers altogether.

U.S. casualties in Afghanistan dropped precipitously in 2014 after the decision to halt conventional combat operations and transition to the advise and assist mission. Yet, U.S. troops are still in danger.

Two U.S. service members died in combat in Afghanistan on Monday. Altogether, the 18-year-old conflict has claimed more than 2,400 U.S. lives. So far this year, 12 U.S. troops have died and 60 more have been wounded.

Pompeo praised Khalilzad’s efforts in the peace talks with the Taliban and said he is optimistic about the possibility of American troops finally coming home from the war in the near future—with the caveat that a durable peace has to be achieved beforehand.

“I hope they’re out not only before the next election, but before we land today, right?” Pompeo said of U.S. troops in Afghanistan, speaking to reporters aboard a U.S. Air Force aircraft en route to Thailand.

The secretary of state added that the U.S. is working on “a peace and reconciliation plan that will permit us to conduct a conditions-based withdrawal from Afghanistan as quickly as we can execute it.”

“That’s the mission the president’s laid out, and we’re working our way there,” Pompeo said. “I hope in the next handful of weeks we’ll have significant progress we can announce.”