Virginia Election Outcome Was About Education. Here Are 4 Actions Youngkin Should Take to Address Parents’ Concerns. 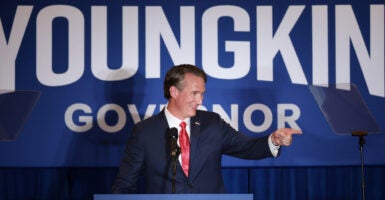 Voters rejected the progressive left’s education agenda for Virginia when they elected Glenn Youngkin. Now, Youngkin has the chance to reform the commonwealth’s education system to serve students and parents. Pictured: Youngkin takes the stage at an election-night rally on Nov. 2 in Chantilly, Virginia. (Photo: Chip Somodevilla/Getty Images)

Glenn Youngkin’s victory in the Virginia gubernatorial race is an indisputable vindication of the values-based case for school choice and parental empowerment.

Voters had two clear and diametrically opposed paths from which to choose.

One path labeled parents who were concerned about critical race theory being taught in the classroom as racists. It forced them to accept radical transgender policies that they did not agree with.

This path dismissed parents’ and students’ questions and concerns about COVID-19 mandates and school closures. It told parents they were not partners with schools in determining the values and content that teachers taught, but were instead subservient recipients of whatever education the “experts” thought their children needed. Parents, in the eyes of the teachers unions, were simply there to open their wallets and fund government schools.

On Election Day, parents rejected going down that path further.

Instead, they chose a path in which parent involvement and input is welcome. This path recognizes that there are legitimate concerns with indoctrinating children with critical race theory—which in recent years has involved separating children by race into affinity groups or teaching them that their future is predetermined based on immutable characteristics such as their skin color.

This path stands for a school where students are kept safe—not exposed to danger—and where school administrators who cover up sexual assaults for political reasons are held responsible. It believes that students should be kept safe and undergirded by the rule of law.

This is the path that parents voted for on Tuesday.

The election was also a victory for proponents of school choice. It also included an important lesson for proponents: that they should not be afraid to make the values-based case for choice.

As my colleague at The Heritage Foundation, Jay Greene, along with the University of Arkansas’ James Paul recently found, only three school choice programs in the entire country needed any Democratic votes to pass and become law in recent decades. Yet, the appeal to policymakers is usually made in economic or even social justice terms.

As a result, school choice programs are often saddled with restraints (such as limits on eligibility instead of being universally available to all students, and being handcuffed with regulations).

The values-based case—that education choice is a necessary tool in fighting everything from critical race theory to radical gender ideology—has taken second fiddle, if made at all. Fundamentally, the election outcome demonstrates that there is power in making the case that school choice is, at its core, about enabling parents to choose learning environments that align with their values.

Gov.-elect Glenn Youngkin’s victory was not only a repudiation of the tenets of critical race theory in K-12 education. It was also a recognition that public schooling has fallen down on its custodial care responsibility. And it validated parents’ very real concerns about the safety of their children while in school.

Last night, parents made their voices heard at a time when school boards in Virginia—with the backing of the National School Boards Association, the threat of being labeled domestic terrorists, and the sanction of the Biden administration’s Department of Justice—have continually tried to silence them.

Now, Youngkin’s charge is to address the concerns he heard from parents through policy change. He has a mandate to do so.

First, he should reject critical race theory’s discrimination from being applied in Virginia’s public schools.

Schools that sort children by race into affinity groups and privilege walks, for example, are in violation of the Civil Rights Act of 1964. Those that compel student speech by requiring them to affirm the tenets of critical race theory are in violation of the First Amendment. Parents should be armed with a private right of action to sue schools that violate these constitutional protections.

Schools should also be maximally transparent about the curriculum and trainings being used within their four walls. Curriculum should be posted online, and parents should be able to find the materials being taught in their children’s schools within a few clicks of visiting the schools’ websites.

Second, Youngkin should take the opportunity to work with the Virginia Legislature to eliminate teacher certification requirements—which have no relationship with student academic outcomes.

Allowing individuals who have subject-matter expertise to enter the classroom without having to spend years in a university-based college of education would do wonders in limiting the power of academia to spread the dangerous ideology of critical race theory from colleges to the K-12 classroom.

Third, Virginia should stop the administrative staffing surge in K-12 schools, which has enabled growth in chief diversity officers—the K-12 brethren of diversity, equity, and inclusion staff in higher education. These “diversicrats” are able to enforce adherence to critical race theory orthodoxy, and are actually counterproductive to narrowing achievement gaps between students.

The Old Dominion has had a modest tax credit scholarship program since 2013, but student eligibility is limited to those from lower-income households or with special needs.

Now is the time for Virginia to follow in the steps of its neighbor to the West and establish universal education savings accounts, as West Virginia did earlier this year. Every single child in Virginia, from the moment they begin kindergarten, should be able to choose the school or education provider that works for them and aligns with their values.

Virginia now has a real opportunity to become a state that honors the wishes of families, enables students to thrive in learning environments that work for them, and rejects the discrimination inherent in critical race theory.

Virginia is likely a bellwether for other states, and as such, policymakers and state leaders should heed an important lesson from last night’s election. They should remember that parents are their children’s first and foremost educators, and that schools are partners—subordinate and accountable to parents—in that reality.