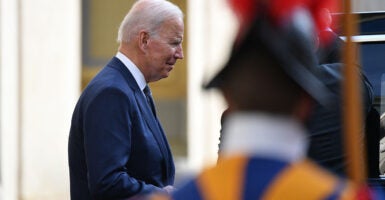 The COP26 climate summit is the product of a “global fantasy" that 195 countries can "address climate change with money and with mitigation,” The Heritage Foundation’s Steven Groves says. Pictured: President Joe Biden leaves the Vatican on Friday ahead of his trip to the summit in Glascow, Scotland.(Photo: Tiziana Fabi/AFP/Getty Images)

Hundreds of world leaders, activists, and researchers are on their way to Glasgow, Scotland, for an annual summit on climate change. But Steven Groves, a Heritage Foundation research fellow, says the gathering is based on a “global fantasy.”

The summit is the product of a “global fantasy that there can be a solution reached by 195 countries in the world to address climate change with money and with mitigation,” Groves said Wednesday during a press call.

The first Conference of the Parties was held in Berlin in 1995. This year’s gathering, dubbed COP26, is regarded as the 26th climate summit even though last year’s event was canceled due to COVID-19.

President Joe Biden will attend the World Leader Summit portion of the climate conference, set for Monday and Tuesday.

Leaders and activists will discuss how to lower greenhouse gas emissions to prevent the world’s temperature from rising by more than 1.5 degrees Celsius.

Groves is the Margaret Thatcher fellow at The Heritage Foundation, parent organization of The Daily Signal.

He says Biden likely will pick up where former President Barack Obama left off at the 2009 summit. That year, Obama pledged that the world’s wealthiest nations would give $100 billion per year by 2020 to the world’s poorest counties to help them fight climate change.

Groves said his concern is that Biden will perpetuate the “fantasy” and “continue to pledge that the United States is going to put up this many billions of dollars a year.”

If Biden makes pledges at the climate summit that America cannot fulfill, that will “further erode American credibility on the world stage,” he said.

Groves said he plans to attend the second week of the summit in Glasgow, which runs from Sunday until Nov. 12.

In an email interview with The Daily Signal, he addressed three of the most pressing questions about the climate conference.

The Daily Signal: What are the goals or objectives of the climate conference in Glasgow?

Groves: The Biden administration’s main goal for the COP26 climate conference in Glasgow is to reestablish American credibility on international climate change issues.  For better or worse, President Biden will fail to achieve that goal.

The American people do not support Biden’s plan to waste taxpayer dollars on an international climate change slush fund. Nor will Americans accept the sky-high energy prices that Biden’s domestic energy policies have wrought.

Biden should not go to Glasgow at all, since he will only end up making empty promises that he cannot keep and the American people do not support.

Daily Signal: Who is going to be present at the conference and why does it matter?

Groves: Biden is flooding the zone in Glasgow at great cost to the American people. In addition to the massive price tag for a presidential visit to a conference center on foreign soil, Biden is sending more than a dozen Cabinet members and senior administration officials to Glasgow.

Biden’s multiple climate change officials, such as [national climate adviser] Gina McCarthy and [special climate envoy] John Kerry, will also join the confab. The carbon footprint of Biden’s grand delegation to Glasgow has yet to be disclosed.

The Daily Signal: What do you anticipate the results of the climate conference will be? And what, in your opinion, should the results be?

Groves: The results of the Glasgow conference will be exactly nothing except a very expensive photo-op for President Biden and his climate change mandarins.

American credibility on the world stage will be further eroded if Biden follows in the footsteps of President Obama in making international environmental commitments that are not supported domestically.

The U.S. position in the world has already taken a major hit due to Biden’s botched withdrawal from Afghanistan.  Biden’s jaunt to Glasgow will further tarnish America’s image by continuing to indulge in the fantasy of international climate change cooperation through the Paris Agreement.