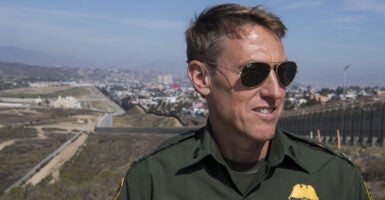 Rodney Scott, seen here in April 2018, when he was chief of the Border Patrol's San Diego Sector, saw his 28-year career with the agency ended by the Biden administration. (Photo: Carolyn Van Houten/The Washington Post/Getty Images)

As a onetime U.S. Border Patrol chief, Rodney Scott previously kept his questions and objections about policies he considered unsustainable to himself. But now, after the Biden administration ousted the nearly three-decade agency veteran, Scott is speaking out.

“We have to be able to control the border to simply know who and what is coming into the country, or you have no security,” Scott, who joined the Border Patrol in 1992 and became chief in February 2020 under the Trump administration, told The Daily Signal.

He referred to human trafficking and drugs such as fentanyl crossing the border.

In June—amid the border crisis—the Biden administration sent Scott a letter of direct reassignment, giving him the option to relocate to another job, resign, or retire. He opted to retire.

There is a significant difference between how the Trump and Biden administrations worked with Border Patrol officials, Scott told The Daily Signal.

“The last administration came to us and asked, ‘What do you need to control the border? What ideas do you have?’ It was very much a team environment,” Scott said of the Trump administration.

When I say that, I mean literally multiple levels of administration and government employees sitting in a conference room to 10 or 11 at night, brainstorming ideas. All that ended on Jan. 20. My team was not asked for advice or any information. Basically, we got edicts from above.

Scott was on Capitol Hill on Wednesday, where he joined other border policy experts and former officials at a public briefing with Republican Sens. Ron Johnson of Wisconsin, Rob Portman of Ohio, and Rick Scott of Florida. The GOP senators said they held the forum because the Democratic Senate majority won’t hold hearings on the border issue.

Scott’s letter in September to congressional leaders asking for a hearing prompted the forum, as Republicans demanded a hearing and the opportunity for him to testify.

“The flow of unaccompanied children, the flow of people exploiting our laws as a family was pretty well stopped when this administration took office,” Johnson told The Daily Signal, adding:

We had an increase in adult males because the administration and the Democrat presidential candidates were signaling throughout the presidential campaign they weren’t going to deport anybody. They were going to offer free health care.

So, you already saw that leading up to the presidential election, the increase in single adults coming. But as soon as Biden blew up the agreements with Central America, the [Remain in Mexico] policy, that’s what sparked this. That’s the root cause.

Before becoming Border Patrol chief, Scott was the chief patrol agent for the San Diego Sector and became acting chief in 2019 before officially becoming the 24th chief of the agency in 2020.

“I ‘get’ different political parties, different administrations have different perspectives on the border,” Scott said. “But what’s going on today is crazy. To basically have a completely open border is just not sustainable.”

He added the conversation is sometimes too narrowly focused on immigration.

“We keep talking about it in the context of immigration. But it’s bigger than that,” Scott said in the interview. “People forget that immigration is just a subcomponent of border security and the thousands of people that are getting away every day that are hiding in the southwest border today.”

Scott said he doesn’t want to be political, and served under both parties—which he said once largely agreed on the issue. But he insisted he’s speaking now as a private citizen.

“Some of it is barriers at the border that make agents more effective,” Scott said. “Some of it is just policies. There has to be a consequence. If there is no consequence to illegal entry, then it’s never going to stop.”