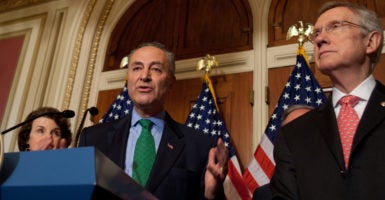 A politician stood on the U.S.-Mexican border in San Ysidro, California, declaring, “The day when America could be the welfare system for Mexico is gone.”

“Whether the space is a job, the space is a home, a place in a classroom, it’s becomes a competition for space. This is a country that’s based on immigration, and we all know that,” Sen. Dianne Feinstein, D-Calif., continued during an August 1993 speech, adding, “We’ve got to, for the time being, enforce our borders.”

President Donald Trump in late January offered to grant amnesty to 1.8 million young illegal immigrants brought to the country as minors—more than twice the number protected under President Barack Obama’s 2012 executive action—in exchange for tougher immigration enforcement that included a border wall, adopting a merit-based immigration system, and cracking down on sanctuary cities—issues many Democrats had either voted for or voiced support for previously.

However, the Senate rejected four compromise bills in February, including one backed by the president, which got just 39 votes. A bill co-sponsored by Senate Minority Leader Charles Schumer, D-N.Y., and Sen. Susan Collins, R-Maine, garnered 54 votes, but was short of the 60 votes needed to pass.

The president made the assertion on Easter Sunday, in response to the Pueblo Sin Fronteras (People Without Borders) group leading more than 1,200 migrants from Honduras and others from El Salvador, Guatemala, Mexico, and Nicaragua to the U.S. The organization has told members its numbers can overwhelm Mexican and then U.S. immigration officials.

“A lot of people are coming in because they want to take advantage of DACA, and we’re going to have to really see,” Trump said Sunday. “They had a great chance. The Democrats blew it. They had a great, great chance, but we’ll have to take a look, because Mexico has got to help us at the border. They flow right through Mexico. They send them into the United States.”

In 2013, 52 Democrats voted for the Border Security, Economic Opportunity, and Immigration Modernization Act. The bipartisan “Gang of Eight” bill backed by Obama included provisions to stop immigration based on family reunification immigration, also known as chain migration; to create merit-based visas; and to expand the border fence.

However, the bill also granted amnesty—or what proponents call a “pathway to citizenship”—for at least 11 million illegal immigrants in the country.

President George W. Bush backed amnesty legislation in 2006 and 2007 that gained broad support from Democrats in Congress, but mixed reaction from his fellow Republicans.

Among the supporters who touted border security elements that included a border fence was Obama, then a senator from Illinois, in October 2006. He praised the legislation for “better fences and better security along our borders,” which he said would “help stem some of the tide of illegal immigration in this country.”

“I think this Senate should be spending much more of its time making it easier to create decent-paying jobs for American workers, instead of allowing corporate America to drive down wages by importing more and more workers from overseas,” Sanders said.

Chain migration is the existing system, which focuses on family reunification. It provides preference for legal entry to relatives, often distant relatives, of people already in the country legally.

However, when advocating a 2007 version of the DREAM Act, Sen. Dick Durbin, D-Ill., expressed problems with chain migration, saying, “The DREAM Act would not lead to ‘chain migration.’ DREAM Act beneficiaries would have very limited ability to sponsor family members.”

“This way, we address the concern raised by many about chain migration, the ability of a citizen to bring in a brother, for example, who in turn then brings in his wife and children,” Kennedy said in a floor speech in April of that year. “Once his wife is a citizen, she can then bring in her parents and other family members in a virtual endless chain of immigration.”

Today, Democrats across the board only use the term “undocumented” and avoid the word “illegal” to describe someone who is in the country illegally.

That wasn’t always the case.

Schumer once lectured supporters of immigration reform to use the term “illegal.” He also stressed there is a difference between legal and illegal immigration. However, that was in 2009, long before he became party leader in January 2017.

“When we use phrases like ‘undocumented workers,’ we convey a message to the American people that their government is not serious about combating illegal immigration, which the American people overwhelmingly oppose,” Schumer said in a June 2009 speech at the Immigration Law and Policy Conference at Georgetown University. “If you don’t think it’s illegal, you are not going to say it. I think it is illegal and wrong, and we have to change it.”

After a young woman, Kate Steinle, 32, was fatally shot in San Francisco in July 2015 by an illegal immigrant who was previously arrested and deported, it was Feinstein, California’s senior senator, who demanded stronger action by local authorities in cooperating with the Department of Homeland Security.

“I strongly believe that an undocumented individual, convicted of multiple felonies and with a detainer request from ICE, should not have been released,” she said. “We should focus on deporting convicted criminals, not setting them loose on our streets. As a member of the Judiciary Committee, I am looking at whether additional federal legislation may be necessary.”