In DACA Talks, Trump Hints of Being Open to ‘Comprehensive’ Immigration Deal 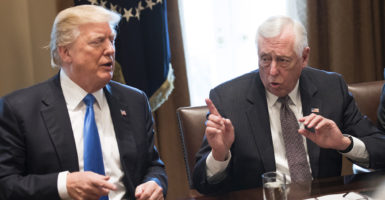 President Donald Trump has a conversation with House Minority Leader Steny Hoyer, D-Md., during a bipartisan congressional meeting on immigration, in the Cabinet Room at the White House. (Photo: Kevin Dietsch/UPI/Newscom)

In deciding what to do about the looming DACA deadline before March, congressional leaders and President Donald Trump agreed Tuesday to address border security, chain migration and the visa lottery program.

“Truly, it should be a bill of love. But it also has to be a bill where we’re able to secure our border,” @POTUS says.

That’s according to Republican lawmakers after the meeting with the president. However, in separate press conferences after the meeting, GOP lawmakers indicated the issues would be dealt with together, while Democrats suggested a two-phase approach, to reach a deal on comprehensive immigration reform.

Trump conferred at the White House with 16 senators and seven House members to discuss reaching a deal on salvaging the Deferred Action on Childhood Arrivals (DACA) program, President Barack Obama’s 2012 executive action that shielded an estimated 800,000 illegal immigrants from deportation brought to the country as minors.

“If you want to take it that further step, I’ll take the heat,” Trump said. “You are not that far away from comprehensive immigration reform.”

Past proposals for “comprehensive” reform have included amnesty, or what advocates call a “pathway to citizenship” for the at least 11 million illegal immigrants in the United States.

In a rare and transparent glimpse of negotiations usually conducted behind the scenes, almost an hour of the 90 minute meeting was televised after being opened to the the White House press pool.

Last fall, the Justice Department announced it was reversing DACA, under threat of a lawsuit from 10 state attorneys general, giving Congress a deadline of March for legislating a replacement.

Trump also said, “I’d love not to build the wall, but you need the wall. … If you don’t have the wall, you can’t have security.”  He said the wall doesn’t have to extend across 2,000 miles of the U.S.-Mexican border.

However, House whips from each side cast doubt on what the “wall” means.

White House press secretary Sarah Huckabee Sanders also told reporters that the wall is part of border security. Saying she didn’t want to negotiate from the podium, she didn’t specify if the four goals would be dealt with in one or two phases, or what Trump meant by “comprehensive immigration reform.”

Asked if granting legal status under DACA would constitute “amnesty,” Sanders said, “No, we believe it is an important part of the process and one we are committed to finding an answer to.”

However, the president should move with caution, said Hans von Spakovsky, a senior legal fellow at The Heritage Foundation.

“Any kind of deal that provides amnesty is a bad idea, because there is no guarantee Congress will keep its promise to end chain migration in the future. The only thing an amnesty will do is attract more illegal immigrants.”

On the possibility of a “comprehensive” deal later, von Spakovsky said, “There’s no way to know what ‘comprehensive’ means until you see the details.”

Chain migration is the existing system that focuses on family reunification, which provides preference for legal entry to relatives, often distant relatives, of people already in the country legally. The diversity visa lottery is a form of legal immigration in which visas are awarded to lottery winners from countries that have low immigration levels to the United States.

Many Republicans favor replacing those with a merit-based immigration system, focusing on filling jobs going begging.

We can deal with potential ‘poison pills’ and other issues and leave comprehensive immigration reform for another day. The Democrats and the Congressional Hispanic Caucus have been negotiating on significant border-security measures and smart technology.

Sen. Tom Cotton, R-Ark., insisted to reporters after the meeting:

“It’s an opportunity to address that challenge, in part because we would be giving legal status in DACA,” said Cotton, who has co-sponsored legislation to replace the existing chain-migration system with a merit-based system geared toward filling vacant jobs.

During the meeting, Trump said:

Still, during the meeting, Trump heralded the bipartisan cooperation.

During the meeting, Sen. Dianne Feinstein, D-Calif. asked about a “clean” DACA bill, meaning legislation with no other immigration-related provisions.
Trump replied:

To me, a ‘clean’ bill is a bill of DACA. We take care of them, and we also take care of security. And the Democrats want border security, too. We started off with Steny [Hoyer] saying, we want security. Everyone wants security. Then we go to comprehensive later on. And maybe that is a longer subject and a bigger subject, and I think we can get that done, too.