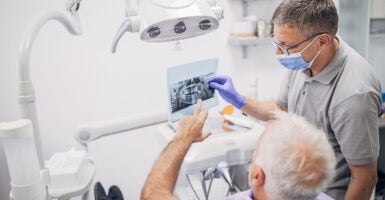 A dentist explains what a patient's dental X-ray shows. While traditional Medicare does not include dental, vision, or hearing coverage, Medicare Advantage, a private alternative, already offers those benefits to seniors without government intervention or interference. (Photo: South Agency/E+/Getty Images)

Slimming down the cost of the Democrats’ massive $3.5 trillion social-welfare spending bill is a compromise that misses the point.

Opposition to the tax-and-spending bill is not just about cost, it’s about a policy agenda that shifts more power and control to the federal government and away from patients and families.

The so-called Build Back Better plan, moving its way through the Democrat-led Congress, is jammed full of policy changes that drive the country closer to a government takeover of health care than ever before.

Trying to slim down the cost or water down the proposals will not resolve those fundamental policy concerns.

The following are seven ways it will be harder for you to keep your health plan, and make it more likely you’d get the subpar benefits that too many do already on government-run plans.

Part of the legislative package would put in place a new federal health care program. The program would be modeled after Medicaid, a joint federal-state program to provide medical services to certain low-income Americans, and would be made available to those individuals in states that did not adopt the Obamacare Medicaid expansion.

While seemingly narrow and targeted, the proposal could easily be scaled up and expanded to new groups. Under such an arrangement, the government would set regulatory rules in favor of the government plan, drive out private competition, compel participation, consolidate enrollment, and shift costs on to health care providers and taxpayers.

Ultimately, it puts in place the bureaucratic infrastructure needed to carry out a full-blown government-run health care system.

The proposal would make existing Obamacare subsidies more generous and make them available to more people, regardless of income.

Since the subsidies are tethered to Obamacare, these changes are intended to drive more people to the government-run Obamacare exchanges, including some of whom would have otherwise had insurance.

The more people enrolled in Obamacare, the more the government controls the delivery of care and benefits. Moreover, these changes attempt to cover up the fact that Obamacare is driving up—not down—the costs of coverage, and that means that the mega-insurance plans in Obamacare will continue to raise premiums, knowing that ultimately the taxpayers will pick up the cost.

The bill changes the requirements for those with access to employer-based coverage to qualify for Obamacare subsidies.

Under current law, individuals with access to employer-based coverage are not eligible for Obamacare subsidies unless their share of the premium costs exceed 9.2%. The bill would lower that threshold to 8.5%.

The private, employer-based market is where the majority of American still get their health care and remains a critical obstacle to a full-blown government-run health care plan. Lowering the threshold is a small, but significant, shift in the opposite direction.

This change alongside expanding the availability of subsidies could disrupt the employer-based market by driving more people out of their existing coverage and toward the government-run plan. A recent Congressional Budget Office estimate notes that the package of policies embedded in the plan would result in 2.8 million fewer people with employer-based coverage.

The proposal blocks access to information about non-Obamacare coverage options. The bill would prohibit federal funds from being used to “promote non-[Affordable Care Act] compliant health insurance coverage” and explicitly defines short-duration and association health plans as such options.

This comes on the heels of the Biden administration’s move earlier this year to use taxpayer money to fund a marketing campaign to promote Obamacare.

With rising costs and fewer options, many Americans have sought out alternative health care arrangements. Promoting Obamacare over non-Obamacare alternatives is yet another attempt to shut down private competition and drive people to the government-run Obamacare exchanges, where the government determines access to the coverage options.

The legislation assumes a larger role for the federal government in Medicaid. The proposal would create a new grant program within Medicaid that would add $190 billion for home and community-based services.

The proposal would also impose new federal requirements on state Medicaid programs and would weaken oversight and accountability through various policy changes.

These efforts would drive out private alternatives and stretch an already overburdened safety-net program.

The legislation proposes adding dental, hearing, and vision to the traditional Medicare program. To avoid an even bigger price tag, the benefits would be phased-in over time. Seniors would still be responsible for a portion of costs, but taxpayers would be responsible for the rest.

While traditional Medicare does not include dental, vision, or hearing coverage, Medicare Advantage—the private Medicare alternatives—already offers these benefits to seniors without government intervention or interference.

Not only does this proposal inject the government where it isn’t necessary, but also piles new obligations onto the already overdrawn Medicare program that will only accelerate the fragile fiscal circumstances facing the program.

Under the bill, the federal government would set prices for certain prescription drugs in the Medicare program, based on prices paid in other countries.

Companies that refused to accept the government price would be subject to an excise tax.

Moreover, government price controls would not end with pharmaceuticals. Similar mechanisms are envisioned with a full-blown government-run program, where the government sets payment rates for all health care services.

Americans only need to look to Canada and the United Kingdom to see the impact such controls have on access to care, where wait lists are common and expected, and where access to treatments are limited or denied.

In summary, there’s a common health care thread running throughout the “Build Back Better” plan: Drive out private coverage alternatives and consolidate enrollment in the government-run plans.