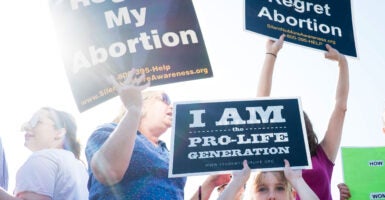 President Joe Biden's pro-abortion fixation rivals that of even former President Barack Obama. Pictured: A young pro-life activist demonstrates with her family and friends on the steps of the Supreme Court on June 27, 2016, during the Obama administration. (Photo: Pete Marovich/Getty Images)

President Joe Biden may be the left’s puppet on a lot of things, but abortion isn’t one of them.

In the past two years, the onetime March for Lifer has become a true believer in the fringe wing of his party, where destroying babies in the womb is concerned. His Justice Department (when it isn’t trying to prosecute parents for speaking up at school board meetings) has been frantically fighting to stop Texas’ pro-life law from taking effect with almost eerie determination.

In this game of legal pingpong, the Biden administration has been angrily firing off briefs any time a court has agreed to let the law take effect. The latest chapter in this whole drama happened over last weekend, when the 5th U.S. Circuit Court of Appeals temporarily lifted a judge’s ban on the law while the two sides slug it out in court.

The Biden Justice Department was furious, insisting that the state’s decision to ban abortion at six weeks is “obvious[ly] unconstitutional” and, as such, Texas shouldn’t be allowed to enforce the law while the lawsuit moves forward.

“If Texas’ scheme is permissible, no constitutional right is safe from state-sanctioned sabotage of this kind,” the Justice Department told the judges on the 5th Circuit. “Partisans of one stripe or another might cheer these outcomes, but they should horrify anyone committed to the principle that this diverse nation is bound by one Constitution.”

Of course, that’s tame compared to some of the left’s other beefs with the Texas law—like the hardships endured by “pregnant men.”

In USA Today, writers bemoan the new and allegedly unjust challenges that Texas’ six-week abortion limit puts on people who identify as transgender. In one of the craziest arguments for dismantling the law, extremists argue, “Getting an abortion while trans was always hard. In Texas, a new law puts outsized burdens on them.”

Like everyone else who stumbled across the story, the Media Research Center’s Matt Philbin almost didn’t believe it. “A hearty congratulations to Texas ‘trans men and nonbinary people’ for really upping their victimhood game,” he wrote.

Meanwhile, the real victims—innocent unborn children—continue to be the object of Biden’s obsession, despite his church leaders’ disgust. If Biden claims to be a devout Catholic, Archbishop Joseph Naumann fired back at the president, “I would urge him to act like one … .” And yet, eight months into this killing culture, Biden’s pro-abortion fixation rivals that of even former President Barack Obama’s.

Nothing, not even the overwhelming opinion of the country he’s leading, seems to dissuade this president. Biden, who’s “far from governing as a ‘personally pro-life politician,” National Review Online’s editors note, is everything pro-abortion activists could have hoped” for. And everything God-fearing Americans must stand against.