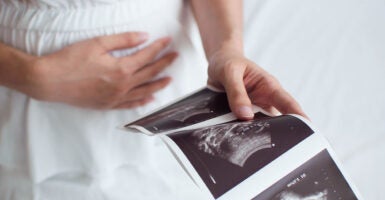 Given that abortions killed approximately 4,676,300 unborn American babies during Pelosi's first four-year stint as speaker, and that she now supports legislation to legalize abortion on demand nationwide, she not only supports the murder of innocent human beings but their mass murder. (Karl Tapales/Getty Images)

During the first four years that Nancy Pelosi served as speaker of the House of Representatives (2007 through 2010), approximately 4,676,300 unborn babies were aborted in the United States, according to estimates published by the Guttmacher Institute.

To put that in more precise language, adopting the accurate wording to describe abortion that Pope Francis recently used, 4,676,300 unborn American babies were murdered in those four years. “It’s more than a problem, it’s homicide,” Francis said about abortion on Sept. 15, as he flew from Slovakia to Rome.

In making this point, Francis was echoing what his predecessor, St. John Paul II, had said in his encyclical letter, Evangelium Vitae.

The moral gravity of procured abortion is apparent in all its truth if we recognize that we are dealing with murder and, in particular, when we consider the specific elements involved. The one eliminated is a human being at the very beginning of life. No one more absolutely innocent could be imagined. In the case of an intrinsically unjust law, such as a law permitting abortion or euthanasia, it is therefore never licit to obey it, or to ‘take part in a propaganda campaign in favor of such a law, or vote for it.’

So, how does Pelosi, who describes herself as a “devout Catholic,” and who is one of the top lawmakers in the United States, deal with this form of murder?

She is for it.

When she first became speaker in 2007, Pelosi put out a statement celebrating the anniversary of Roe v. Wade, the Supreme Court decision that declared the killing of an unborn child a “right.”

“Roe v. Wade is based on a woman’s fundamental right to privacy, a value that all Americans cherish,” Pelosi said then. “It established that decisions about whether to have a child do not and should not rest with the government.”

“As I have throughout my time in Congress, I will continue to work to ensure a woman’s right to choose,” she said. That same year, in Gonzales v. Carhart, the Supreme Court upheld a federal statute prohibiting partial-birth abortion. In that opinion, the court quoted the testimony of a nurse who had witnessed one of these procedures. The doctor, this nurse testified, “went in with forceps and grabbed the baby’s legs and pulled them down into the birth canal.”

“Then he delivered the baby’s body and the arms—everything but the head,” she said. “The baby’s little fingers were clasping and unclasping, and his little feet were kicking,” the nurse testified. “Then the doctor stuck the scissors in the back of his head, and the baby’s arms jerked out, like a startle reaction, like a flinch, like a baby does when he thinks he is going to fall.”

“The doctor opened up the scissors, stuck a high-powered suction tube into the opening, and sucked the baby’s brains out,” she said. “He threw the baby in a pan,” she said, “along with the placenta and the instruments he had just used.”

The day the court ruled that Congress could outlaw partial-birth abortion—and quoted this nurse’s description of it—Pelosi condemned the court’s action.

“The court’s decision is a significant step backwards,” she said. In her view, the court should have declared it a constitutional right to rip a baby feet-first from his mother’s womb and suck out his brains. The court is now scheduled to hear arguments on Dec. 1 over a Mississippi law that bans most abortions after 15 weeks. Last month, the court voted 5 to 4 not to issue an injunction to stop enforcement of a Texas law that bans abortions when an unborn baby has a heartbeat, which occurs at about six weeks.

Pelosi went to the House floor on Sept. 24 to advocate enactment of the euphemistically titled Women’s Health Protection Act, which would nullify these laws. “For the first time ever by congressional statute, this legislation would legally enable the violent death of unborn baby girls and boys by dismemberment, decapitation, forced expulsion from the womb, and deadly poisons for any reason until birth,” Rep. Chris Smith, R-N.J., explained in a floor speech opposing the legislation.

“This bill,” he said, “will nullify every modest pro-life restriction ever enacted by the states.” Pelosi, in supporting the bill, which passed the House on a 218 to 211 vote, wanted the world to know she approached this issue “as a Catholic.”

“I come to this as a Catholic and a mother of five, in six years and one week, and with the joy that all of that meant to us but with the recognition that it was my husband and I—it was our decision,” Pelosi said. “And we should not, in this body or in that court, be making decisions for the women in America.”

In other words, she voted “as a Catholic” for what the church correctly calls the murder of “absolutely innocent” human beings.

Given that abortions killed approximately 4,676,300 unborn American babies during Pelosi’s first four-year stint as speaker, and that she now supports legislation to legalize abortion on demand nationwide, she not only supports the murder of innocent human beings but their mass murder.