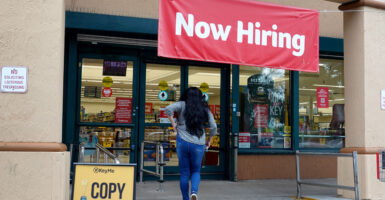 Without enough willing workers, employers are struggling to get the labor they need to recover from the pandemic and meet customers’ demands. Pictured: A “Now Hiring” sign hangs outside a Winn-Dixie supermarket on Sept. 21 in Hallandale, Florida. (Photo: Joe Raedle/Getty Images)

The September employment report released on Oct. 8 showed a modest employment gain, with 194,000 new jobs added, and a drop in unemployment from 5.2% in August to 4.8%.

What appears to be good news in the report—a 0.4 percentage point drop in the unemployment rate to 4.8%—is not all positive news. The decline is due in part to 183,000 people dropping out of the labor force as opposed to unemployed workers finding new jobs.

This is also the second month in a row of lackluster job gains that have fallen about 700,000 below expectations.

Normally, these last two subpar job reports would be bad news for unemployed workers. But with a record high 10.9 million job openings in the U.S., the poor job gains are perhaps most troubling for employers and consumers.

Without enough willing workers, employers are struggling to get the workers they need to recover from the pandemic and to meet customers’ demands. Americans across the country also continue to experience long waits, shortages of goods and services, and rising prices.

The current record-high statistic—10.9 million job openings—is simply astonishing. Not only is this 3.4 million more than the previous all-time record set in November 2018, but the gap between the number of job openings and the number of unemployed workers has never been higher.

With 7.7 million unemployed workers and 10.9 million job openings, there are 3.2 million more jobs available than there are unemployed workers. Employers are having a hard time finding the workers they need. They’re also struggling to keep them onboard as nearly 4 million workers have been quitting their jobs each month.

To make matters worse—and not yet evident in the employment data—the Biden administration’s proposed Occupational Safety and Health Administration COVID-19 vaccine mandate will add another burden onto employers. The rule requires those with 100 or more employees to act as the vaccine police and face fines of up to $14,000 per violation.

With layoff rates near record lows, employers don’t want to have to fire good workers for personal reasons unrelated to their work.

About 1,800 school safety agents and 2,000 teachers were placed on unpaid leave in New York City’s public schools as the city’s COVID-19 vaccine mandate for public schools was implemented on Oct. 1. Employment in state and local education across the U.S. fell by 161,000 in September.

In many areas of the country, COVID-19 vaccine mandates could threaten public health and safety due to a shortage of police officers, firefighters, and health care workers.

Dustin DeRollo, a spokesperson for the Los Angeles Police Protective League, noted that only 56% of Los Angeles Police Department union members are vaccinated and that a loss of a large number of police officers “would be nothing short of catastrophic for the safety of our residents.”

The unprecedented labor market suggests a troubling trend toward a culture in which work is optional. Government policies in response to the pandemic have undoubtedly contributed to the idea of optional work. This includes 18 months of unemployment insurance benefits that gave workers more money to stay on the sidelines than to work and ongoing expansions in Obamacare subsidies that have reduced the incentive to work.

Unfortunately, the Biden administration and liberal politicians want to enact policies that will double down on these troubling employment trends by further inflating the demand for goods and services with $3.5 trillion of government spending and policies that would further limit the supply of available workers by making it easier for able-bodied individuals to sit on the sidelines.

Such massive spending would stoke fiscal distress and inflation concerns and add insult to injury for struggling businesses by raising taxes on employers, imposing new regulations on businesses, and micromanaging employer and employee relationships.