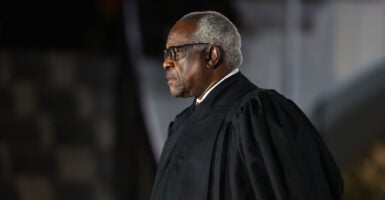 "What I really appreciate about Justice Clarence Thomas' comments on the Declaration of Independence ... is that they come from a man who has experienced racism," Daily Signal reader Eric Kielhorn writes. Pictured: Thomas on the South Lawn of the White House as he prepares to swear in Justice Amy Coney Barrett on Oct. 26, 2020. (Photo: Tasos Katopodis/Getty Images)

There clearly has been a complete loss of respect, tolerance, and willingness to listen and understand any political views that may differ from one’s own.  Any demonstrations in front of private homes, disruptions of family dinners in restaurants, and harassment of spouses and children absolutely should be off limits in expressing personal views.

This type of behavior is not a constitutional right of free speech. It is bullying, pure and simple, and is against the law. Such demonstrations must be dealt with by law enforcement for what they are—harassment, assault, disruption of public services, disturbing the peace, etc.

It’s far past time to deal with the bullies of our day.—T.A. Galioto, Washington

Dear Daily Signal: Chad Wolf’s article about the protests outside his house, with some of his neighbors participating in it, brings out a myth we have about so-called fellow Americans.

Too many in the Democratic Party are aligned with the communists and hate our country, heritage, individual liberty, Bill of Rights, and our way of life. It should be obvious, but it doesn’t seem to occur to most liberty- and country-loving Americans.

It is very much akin to Americans not understanding for a long time that Islamic jihadists, including those in Iran, have been waging war against us—until 9/11 happened.

Mr. Wolf needs to understand that some of his neighbors will be willing to be concentration camp guards, if and when conditions get to that point. Their allegiance to the Democratic Party overwhelms any semblance of morality. Their whole thrust is to destroy morality and humanity.

We have to wake up instead of walking around lamenting the lack of fairness. I am also willing to bet that you will not publish my comments, and that is also part of the overall problem of fear.—Ananta Gopalan, Bluffton, S.C.

Dear Daily Signal: I can empathize with Chad Wolf’s angst and dismay when friends and neighbors betrayed his wife and him by joining the illegal protesters in front of their house (“My Home, Family Were Targeted by Protesters. This Must Stop.”

My wife and I were shocked when we were betrayed by people who we truly thought were old friends. Even though we never openly campaigned for Donald Trump or wore MAGA hats in 2016, they correctly assumed our allegiance when we didn’t join them in their incessant Trump-bashing.

Turns out that they always had resented our faith (we’re born-again Christians, but we never beat them over the head with a Bible); our education (we’re the only couple in the group with college degrees, but we never brought that up); and our money (which we never mentioned, but they made assumptions) as well as our politics. The only catalyst they needed to implement the betrayal was Trump’s victory.—Ron Carmony, Warner Robins, Ga.

Dear Daily Signal: As Chad Wolf notes in his commentary, The Washington Post’s editorial board has now opined: “Leave spouses, children and homes out of it.”

Now that the American left is in control, are we to believe that the Post has analyzed the problem and proposed a new solution? The Mafia, another branch of organized crime in America, established that rule many years ago. And they were far better at enforcing it.

If a Republican administration is ever elected again, that Post editorial will disappear.

Remember, as Dennis Prager says, “The left ruins everything it touches. Everything. There are no exceptions.”—Susan Lefebvre, Greenland, N.H.

What Wolf describes is alarmingly like Kristallnacht in Germany in 1938, about which Hitler claimed to know nothing.

In contrast to some, the rest of us don’t have Secret Service guards.

It’s no wonder the couple in Missouri brought out their personal firearms [when protesters marched on private property], no matter how inappropriately they were displayed.—Paul Levy, Carolina Beach, N.C.

Why the restraint?  That is not “free speech.”

Simply call it what it is: terrorism. One step away from kidnapping of family members.—Bob Smith

Protesting and marching peacefully is different than harassment. What we see coming from the left is vile harassment and needs to stop.—Robert D.

Clarence Thomas on a Lasting Declaration

Racial division in the USA appears to be largely fomented by elitists who have in mind the destruction of America in favor of a socialist New World Order. Dividing by race has been the ploy that worked —better than class, religion, or economic divisions.

I hope and pray it is not too late to return to the freedoms we have enjoyed for nearly 250 years. May God bless America.—Anna Rolen, Alexandria, Va.

Dear Daily Signal: What I really appreciate about Justice Clarence Thomas’ comments on the Declaration of Independence, and what gives them real gravitas, is that they come from a man who has experienced racism.

These comments come from a man who experienced things such as the shocking murder of Martin Luther King Jr. They come from a period of time when racism was very much prominent in our country. And despite that, Justice Thomas came back to his roots as an American and as a Christian.

I think one of his most poignant comments was the following: “While we have failed the ideals of the Declaration time and again, I know of no time when the ideals have failed us.”

He went on to say that despite what our country has been through, the Declaration of Independence still stands and its principles still stand. The problem we have in this country is that if we think we can’t attain an ideal or a standard, we change the ideal or standard.

I, like Justice Thomas, think that is a mistake. Our society’s degradation is predicated upon us lowering the bar. We have done it in education, we have done it with our national morality, and we are doing it with what we expect from our political leaders.

Don’t get me wrong here. Nothing anywhere close to perfection is capable on this side of eternity. That doesn’t mean that we shouldn’t continuously strive for that ideal. And one of those ideals is found in the Declaration of Independence, which states that all men are created equal and endowed by their Creator with certain inalienable rights.

All men are created equal. This clause has been a stumbling block for a long time. Although we have made strides in this regard, it is true that we still have work to do. But does that mean that we throw out the baby with the bathwater?

Just because we haven’t met those ideals as perfectly as we would like as a nation, does that mean that we need to scrap documents such as the  Declaration of Independence and our Constitution? Certainly not. If we do this, we shall have tyranny.

That is, as Vladimir Lenin put it regarding his beloved communism, some people are more equal than others. Fellow Americans, let’s not allow this nation to be cast adrift. Let’s turn the ship around before we get into those dark, foreboding and dangerous seas.—Eric Kielhorn, Norwich, Conn.

Dear Daily Signal: The piece by Star Parker on Clarence Thomas and the Declaration of Independence needs to be emphasized in the most ways possible (“Clarence Thomas’ Remarks Reveal America’s True Culture War”).

The Declaration is the work of our best men of yesterday and is true for today and all millennia. It would be great if you could provide a link to his speech, or a reprint of same. Clarence Thomas gets it.—John Poe, Bridgeville, Del.

Sure, John. Here is C-SPAN’s video of the Sept. 16 speech at Notre Dame.

Wow! A true example of what a real, God-fearing, American looks like.

Clarence Thomas talks about eternal truths in such a way that gives hope and optimism to those among us who are old enough to remember when these truths were indeed self-evident and accepted as such.

No doubt he is the best Supreme Court Justice in my 81 years on Earth, in my opinion. I wish he would speak to us more often.—Mike Cancienne

It is refreshing to hear what Clarence Thomas had to say regarding the Declaration of Independence and this country today. It is what most conservatives believe.

We are all flawed people. That’s why Jesus died for us. Once we accept that and live accordingly, we will be a better nation—because a nation is its people.

I believe that Christians have not honored and worshipped God as he deserves and asks us to; therefore, we have allowed the enemy to transform our minds and behavior. Unsaved people are always going to serve themselves and their greed first, with no respect for others.—Barb Black

To Justice Thomas: Right on, brother! I say this as your basic WASP. I am happy that you are where you are, working for the good of this country.—Robert Bunce, Colchester, Conn.

Clarence Thomas’ words are invaluable at this period of schism. They are healing, significant, and historically accurate.—Jacqui Klein

I am sharing Justice Clarence Thomas’ comments with all who will read it. I am proud of Star Parker as well as him. By the way, I know some fellow whites who, like myself, need to see more of these articles.—Aniel James Payne

Thanks to Star Parker for a well-written, thoughtful, and intelligent summary of Justice Thomas’ presentation.—William Poser

A great address at Notre Dame by a great and courageous man. I have nothing but admiration for him, and have had for decades. And I happen to be an old, conservative, white guy.—Wayne Peterkin, Evangeline, La.