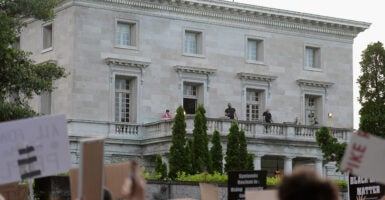 Security personnel watch from the balcony of the St. Louis home of Mark and Patricia McCloskey as protesters gather outside July 3, less than a week after the incident that led to the couple's being charged with "exhibiting" firearms in front of trespassers. (Photo: Michael B. Thomas/Getty Images)

A Missouri prosecutor faces heavy scrutiny at the national and state level for bringing criminal charges against a St. Louis couple who pointed guns at trespassers in late June to defend themselves and their property.

St. Louis Circuit Attorney Kimberly M. Gardner filed the charges against Mark and Patricia McCloskey, who became nationally known because of a viral video of them holding firearms outside their home as protesters marched past.

“It is illegal to wave weapons in a threatening manner at those participating in nonviolent protest, and while we are fortunate this situation did not escalate into deadly force, this type of conduct is unacceptable in St. Louis,” Gardner, a Democrat, said in a statement.

The McCloskeys both were charged Monday with a single felony count of exhibiting a firearm in an angry or threatening manner. He held a semiautomatic rifle, she a handgun.

The couple has said that protesters tore down a gate to gain entry to their property June 28.

“The president, I asked him about that this morning. He said it is absolutely absurd what is happening to the McCloskeys.

There have been many cases brought to her attention of violent rioters that she has failed to charge. But instead, she’s charging the individuals who are defending themselves from violent protesters. You have 300 to 500 protesters who stormed the gates, tore down the gates, and trespassed on their property.

The White House press secretary noted that Patricia McCloskey said some trespassers threatened to kill the couple and occupy the house, while others shouted threats to burn down the house.

“They were completely within their right, and it is an egregious abuse of power,” McEnany said.

In a video announcement, Missouri Attorney General Eric Schmitt, the state’s top law enforcement official, said he would seek to dismiss the case. Schmitt, a Republican, called it a “political prosecution” and said citizens shouldn’t be targeted for exercising their right to self-defense.

If it goes to trial, the case likely will boil down to whether a jury believes the couple reasonably believed they were acting in self-defense, said Amy Swearer, a legal fellow at the Institute for Constitutional Government at The Heritage Foundation.

“The burden is on the state to prove it wasn’t reasonable self-defense,” Swearer told The Daily Signal. “There are so many questions to piece together for the facts and the timeline, I don’t envy lawyers from either side of this case. But it is good to have so much video, so it’s not just a he said/she said.”

Although there may be a legitimate question whether protesters were on the McCloskeys’ property, the couple asserted that some in the crowd were armed and shouting threats, Swearer said. The broader context includes the violent unrest that was happening in the area, she added.

The prosecution’s championing of the right to protest would be a difficult case to make, Swearer said.

“The protesters were out of public property and in a private gated area,” she said. “It’s not the case that the McCloskeys went out of their way to silence anyone.”

Missouri Gov. Mike Parson, a Republican, tweeted Tuesday: “Every Missourian has the right to protect their family and their personal property.”

The previous day, Parson also was critical of Gardner on Twitter, noting that “the Circuit Attorney’s office has admitted there is a backlog of cases and dozens of homicides that haven’t been prosecuted, yet she has accelerated this case forward.”

Mark McCloskey, 63, and his wife Patricia, 61, are both lawyers.

Sen. Josh Hawley, R-Mo., called the prosecution an abuse of power and last week asked the U.S. Justice Department to investigate the prosecution by Gardner as a possible civil rights violation.

“This is an unacceptable abuse of power and threat to the Second Amendment, and I urge you to consider a federal civil rights investigation into the St. Louis Circuit Attorney’s Office to determine whether this investigation and impending prosecution violates this family’s constitutional rights,” Hawley’s July 16 letter to Attorney General William Barr says, adding:

There is no question under Missouri law that the McCloskeys had the right to own and use their firearms to protect themselves from threatened violence, and that any criminal prosecution for these actions is legally unsound. The only possible motivation for the investigation, then, is a politically motivated attempt to punish this family for exercising their Second Amendment rights.

Indeed, this is part of a troubling pattern of politically motivated prosecutorial decisions by the St. Louis Circuit Attorney, who has not seen fit to prosecute many violent offenders, and who has expressed hostility to gun rights in the past. Recently, reports indicate that she declined to pursue charges against dozens of individuals arrested during a weekend of riots in the city.

Gardner was elected in 2016. The St. Louis Post-Dispatch reported that her campaign was financed in part by the Safety & Justice Committee, a super PAC financed by liberal billionaire George Soros.

Gardner framed the prosecution as protecting the First Amendment right to protest, saying: “We must protect the right to peacefully protest, and any attempt to chill it through intimidation will not be tolerated.”

She added: “The people of St. Louis have elected me to pursue equal justice under the law fairly and impartially, and that is what I intend to do.”