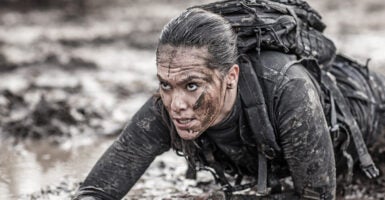 Women who voluntarily join the military serve honorably, but there’s a simple rule for what ought to be in defense legislation: Does it promote the common defense? Drafting women doesn’t. (Photo: Lorado/E+/Getty Images)

Every year for decades, Congress has passed a National Defense Authorization Act.

This year will likely be no different, but there’s a provision in this year’s bill that requires young women to register for Selective Service—that is, the draft.

Many women already provide for our national defense by volunteering their service. Women serve honorably in every branch of our armed services and add value to our military. Forcing women into the draft is just a bad idea that ought to be taken out of the legislation.

There’s a simple rule for what ought to be in defense legislation: Does it promote the common defense?

The draft no longer serves a purpose, and adding women to the roles doesn’t change that.

For starters, Selective Service—the draft—contributes nothing to military readiness.

The draft is an anachronism masquerading as something that’s still relevant. The draft contributes nothing to deterring the likes of China, Russia, Iran, or North Korea.

The draft does nothing to build better citizens or patriotism, since other than filling out a form, it requires nothing from our youths. The vast majority of them would not qualify for military service whether they were drafted or not.

The reality is, the odds of anyone entering military service from the draft is about as likely as President Joe Biden coming clean about inflation, Afghanistan, or the southern border.

Perhaps that’s why politicians promoted this completely symbolic move to draft women. They know there are likely no consequences for doing this.

On the other hand, it’s a completely empty gesture for a politician to claim they are pro-equality. This is an effort to appear “woke,” while doing less than nothing for the military—or for women.

The last thing America needs are more people worshipping at the altar of wokeness, as opposed to living in the land of reality.

Further, this rush to draft our daughters robs women of a voice in the matter. The idea has not been fully debated in public, and no politicians have campaigned on it, thereby allowing women a say over this change to their lives. Nobody asked them.

In fact, with so many Americans opposed to mandatory vaccinations, who thinks they would be more enthusiastic about compulsory military service?

If we want more young men and women to serve their country, let’s improve voluntary opportunities to serve. Let’s create more opportunities for them to join the Reserves and National Guard, expanding options to be citizen soldiers.

If the Pentagon really wants a further option, let’s have a voluntary registration, where qualified men and women can sign up for call-up in times of national emergency and designate whether they would be willing to serve in combat or noncombat roles.

Congressional leaders should come to their senses and take the “draft our daughters” clause out of the bill. Let’s step back and have an honest discussion in the light of day with Americans about what they really want and a serious assessment from the Pentagon about real measures to improve military preparedness.

Let’s leave the woke aside for once.

This column has been revised since publication.