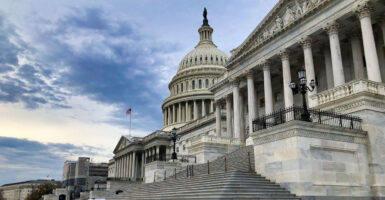 On Sept. 23, over Republican opposition, Democrats passed a measure requiring all women ages 18 to 25 to register for the Selective Service, just as men are currently required to do. Pictured: the U.S. Capitol in Washington, D.C. (Photo: L. Toshio Kishiyama/Getty Images)

The shiver that ran down your spine Thursday could have been the chill in the air—or the draft in the House.

On Sept. 23, over Republican opposition, Democrats passed a measure requiring all women ages 18 to 25 to register for the Selective Service, just as men are currently required to do. Or rather, Democrats stuffed that measure inside a gigantic, must-pass bill called the National Defense Authorization Act to soften Republican opposition with a cushion of $24 billion in increased defense spending.

House Republicans from the Freedom Caucus tried everything to remove the provision that would force young women to register for the draft.

Pushing through watershed changes without debate, hiding them under billions of dollars in defense spending—is that the way democratically elected governments are supposed to work? Only when a radical faction seeking to erode people’s norms finds itself in power with only a narrow margin.

Radical indeed is the provision that would require women to register for the Selective Service. Innate physiological differences make men, on average, more fit to fight and win our nation’s wars.

Such high-casualty, front-line combat roles are precisely the positions a draft serves to replenish. Calling women and men equally into these roles is unjust, because they are not equally able to meet the physical requirements. Nor is there a need, since America’s current population of young males is more than sufficient to meet the needs of a draft.

Why, then, are House Democrats intent on making it law? For them, the question is one of ideology.

Since the beginning of this Congress, they have devoted themselves to eliminating all gender distinctions and even all gendered language from U.S. law. Current law regarding the Selective Service requires all “males” to register; the Democrats want to change it to require all “persons” to register, thus forcing it on women, too. As always, ideology makes bad policy.

It’s a normal tactic for Democrats to exploit a must-pass bill like the National Defense Authorization Act by “jamming it full of social engineering,” said Roy, who voted against the bill.

Democrats know Republicans “can never oppose the NDAA because it has a troop pay raise or because it’s for something we all believe strongly in, which is making sure our military is strong. But we can’t allow that to become the standard,” said Roy. “That’s how we ended up with a woke military.”

Normally, it’s prudent to take anything passed by House Speaker Nancy Pelosi, D-Calif., and the radical Democratic majority with a grain of salt. After all, most of their hare-brained schemes will die unconsidered in the U.S. Senate. But that logic doesn’t hold for this provision because it has already passed in the Senate version of the bill.

Unless the provision is stripped out of both bills in conference, Roy warned, “it would, for the first time in the history of our country, force conscription upon women.”