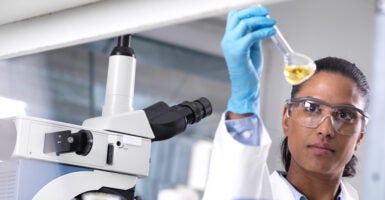 The Congressional Budget Office says Democrats' drug-pricing scheme would mean two fewer drugs in the first decade and 23 fewer in the second decade. But an independent study finds more than 10 times the effect on research and development—a loss of up to some 340 new drugs over the same period. (Photo Illustration: Westend61/ Getty Images)

There are too many dreadful provisions in Democrats’ $3.5 trillion spending monstrosity to count, but one is rising to the surface as especially destructive. That would be its prescription drug price-control schemes.

A study by University of Chicago economist Tomas Philipson and analyst Troy Durie concludes that the Congressional Budget Office is wrong by more than an order of magnitude in its estimates of how many new and better drugs would be lost if this legislation were to be enacted.

The CBO said the drug-pricing scheme would mean two fewer drugs in the first decade and 23 fewer in the second decade. Philipson finds more than 10 times the effect on research and development—a loss of up to some 340 new drugs over the same period.

The legislation before Congress would call for Medicare to “negotiate” drug prices. But price negotiation already happens thousands and thousands of times between drug companies and drug plans offered to seniors today.

The word “negotiate” to Democrats means government-imposed price controls, topped by confiscatory taxes. “Companies face a tax as high as 95% on sales if they don’t concede to the government price, meaning this isn’t a negotiation, but a demand,” Philipson wrote in a piece for The Wall Street Journal.  “Drug companies would have to offer commercial insurers the same rates.”

The drug “savings” would help finance the $3.5 trillion spending spree. “If enacted, these policies would harm patients enormously,” Philipson writes.

Biotech investors sounded alarms at the National Press Club last week about what that would mean. They said the price-control scheme would dry up investor interest in the biotech sector.

“If the government can pick any arbitrarily low price it wants and prevent a company from saying ‘no’ by threatening it with a ruinous 95% tax, then I could not justify any biomedical [research and development] investment to my investors,” said Peter Kolchinsky, a founder and managing partner at RA Capital Management. “In other words, we should expect a near-total collapse of R&D funding.”

The U.S. will forfeit its leadership in this global industry if this bill were to pass by eviscerating the incentive for investors to risk capital to bring new drugs to market, already an arduous, high-risk process.

It takes about $3.5 billion and a decade or more—in normal times—to bring a new drug to market.

Investors would dramatically cut investment in new drugs for cancer, genetic diseases, childhood rare diseases, and so much more. “They’ll disappear if Congress passes these price controls,” said Dr. Arjun Goyal, co-founder and managing director at Vida Ventures. “Ultimately, patients will lose out, both here in the United States and globally.”

A patient with cystic fibrosis, Gunnar Esiason, spoke at the Press Club event, organized by the Incubate Coalition. In his early 20s, he said, he could barely get out of bed in the morning and was constantly in and out of hospitals and operating rooms.

Today, he has an MBA, a productive job, is married, and has a baby on the way. All because he takes three pills a day to control his disease. That would be three pills a day that are not available to patients in Canada and Australia and other countries that impose restrictions like those being considered by Congress.

Instead of curing diseases, reducing symptoms, and extending life, we would see more people needing much more expensive treatments with hospitalizations and surgeries, and dying when they could have lived.  The interruption in the natural evolution of scientific research would be incalculable.

What should we do instead? There are more sensible drug-pricing reforms, like a Part D-style redesign and reform of Part B, that make sense.

Joel White and the Council for Affordable Health Coverage offer detailed policies in the prescription for affordability, focusing on value, coverage, competition, and transparency.