The Enduring Path to Financial Health: Graduate, Work, Marry, and Have Children 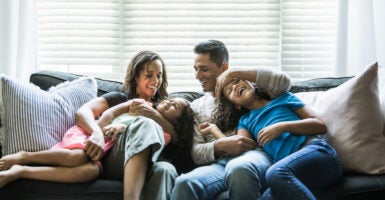 The basic path to financial health in this country has been revealed once again by the Census Bureau’s annual report on income and poverty, which was released this week. What did it show?

One may have suspected this was the case simply by looking at the society around us. But the Census Bureau’s hard numbers and the lessons they teach are worth reviewing.

The COVID-19 pandemic made 2020 a tough year in the United States, causing a recession last March and April and leading to an overall decline in household income.

The Census Bureau categorizes its income statistics by what it calls “family households” and “nonfamily households.” “A family household,” it says, “is a household maintained by a householder who is related to at least one other person in the household by birth, marriage, or adoption and includes any unrelated individuals who may be residing there.

A nonfamily household “is a householder living alone (a one-person household) or sharing the home exclusively with nonrelatives.”

People who regularly go to work and maintain a family also tend to have low poverty rates, according to the Census data.

The highest poverty rate was among female householders who had no spouse present but did have a child under 6. For them, it hit 46.2%.

But among those with a bachelor’s degree or higher, only 4% were in poverty.

The Census data confirms two things: America is a land of opportunity, and those who take advantage of it by working hard and adhering to traditional values tend to earn more money than those who do not.