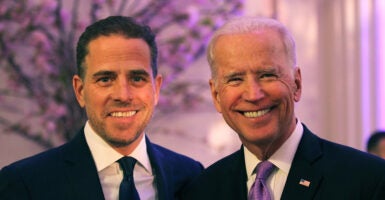 Then-Vice President Joe Biden is seen here with son Hunter Biden on April 12, 2016. During the elder Biden's 2020 presidential campaign, he got an invaluable campaign "contribution" from Twitter when the social media giant spiked a news account of damaging information about the two found on the son's abandoned laptop. Now, the Federal Election Commission has given Twitter a pass on it. (Photo: Teresa Kroeger/Getty Images)

If The New York Times is to be believed, the Federal Election Commission has cleared Twitter of violating any election laws by censoring a New York Post story about Hunter Biden’s notorious laptop less than three weeks before the 2020 election.

According to The New York Times report, the FEC has decided that Twitter’s censorship of the New York Post was “undertaken for a valid commercial reason, not a political purpose” and “followed existing policies related to hacked materials.”

The FEC also excused Twitter because it changed its mind “within a day of its decision,” according to the Times.

Not to put too fine a point on it, but that ruling is garbage.

Emails strongly implied that Joe Biden himself knew of, approved of, and potentially benefited personally from some of the arrangements. That was a blockbuster scoop.

It was obviously an inherently political decision to block such a story so close to an election, so hiding behind the claim that it was a commercial decision is ludicrous. It also ignores an inconvenient truth: The left uses Big Tech to do that which the federal government cannot; namely, censor political opponents. (Just ask White House press secretary Jen Psaki.)

As The New York Post correctly pointed out in its reaction to the FEC: “Does anyone think for a moment that Twitter would have censored a report about a laptop owned by Donald Trump Jr.?”

The FEC also backed Twitter because the social media giant had “received official warnings throughout 2020 from federal law enforcement that ‘malign state actors’ might hack and release materials associated with political campaigns and that Hunter Biden might be a target of one such operation.”

But there has never been any evidence that the laptop or its contents were the work of “malign state actors,” despite the Biden campaign’s attempts to suggest as much. And even while the campaign was creating this smoke screen, it never once denied that the laptop belonged to Hunter Biden and was authentic.

Indeed, there was public confirmation that the laptop was genuine.

Similarly, the “hacked materials” dodge doesn’t hold water at all.

Hunter Biden’s laptop was not hacked. It was abandoned by him in a Delaware repair shop, another fact that has never been refuted.

It’s also worth noting that Twitter has had no problem with the promotion of illegally leaked tax documents belonging to former President Donald Trump or other wealthy people.

And finally, Twitter’s quick reversal “within a day,” as described by The New York Times, is also bunk. The platform had locked the official account of the New York Post and demanded that the newspaper delete the tweet promoting its original story.

The standoff lasted two weeks before Twitter relented, not just a single day as claimed.

In covering the FEC ruling, The New York Times was still unable to help itself, as it declared that the whole laptop story was “unsubstantiated” before later quietly removing that word without including an editor’s note. The only possible reason that anyone could describe the laptop as “unsubstantiated” is that the vast majority of the news media steadfastly refused to cover it for so long.

I served as communications director for the Trump 2020 campaign for two years, and I had a front row seat for this Twitter nonsense and the impact that it had on election coverage in the closing days of the race.

The controversy of the New York Post story and Twitter’s censoring of it allowed the corporate media to enforce a near-total news blackout.

For many news outlets, the only way they would cover the story was to try to discredit it as an indictment of Joe Biden.

Seizing on the false idea of nefarious foreign actors, most news organizations gave great play to a letter from “former senior intelligence officials” who offered their opinion that the story appeared to be “Russian disinformation,” even though they admitted themselves that they had no knowledge of that being true.

When a former business partner of Hunter Biden’s emerged, claiming that Joe Biden knew all about the overseas transactions and was actually cut in on some deals, most reporters were alarmingly unmoved.

And when James Rosen of Sinclair Broadcasting broke the story that in 2019 the FBI launched an “open and ongoing” money laundering investigation into Hunter Biden and his associates, no one else in the Beltway media cared.

For the two weeks leading up to Election Day 2020, the Trump campaign held daily conference calls with the media, imploring them to cover the story with the seriousness it deserved. Again, the laptop and its significance were met with a collective shrug.

There were a couple of factors at work here, we believed. First, most reporters opposed Trump and favored Biden. Second, there already had been a determination—albeit unspoken—that the laptop was not news and would not be covered.

No single member of the mainstream news media wanted to be the first to step out of line.

Pack journalism can be a problem when many reporters run with the same story that later turns out to be wrong. It can be just as bad when everyone decides against covering something that is demonstrably newsworthy.

In the end, it all worked in Joe Biden’s favor. Trump pollster John McLaughlin found that 36% of Biden voters were unaware of the laptop’s existence and that 4.6% of Biden voters would have changed their minds if they had known about it—easily enough to change the results in swing states.

The inescapable conclusion is that the FEC has justified what really should be viewed as election interference by a major social media platform and mass malfeasance on the part of the political news media.